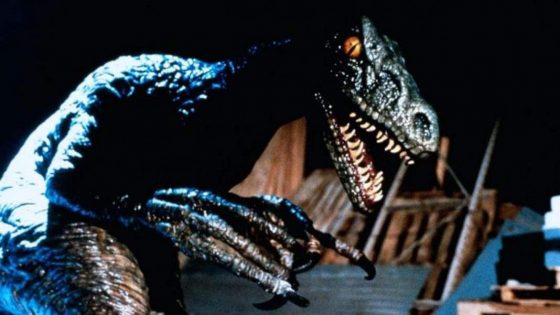 In 1993, a movie from a legendary director based on a novel featuring genetically engineered dinosaurs was released that changed cinema forever.  The movie was obviously Steven Spielberg’s Jurassic Park but Carnosaur came out that same year.  Legendary producer and director Roger Corman had acquired the rights to the 1984 novel Carnosaur in 1991 and quickly got a production going to draft off the marketingpalooza that was leading up to Jurassic Park.  Adam Simon wrote and directed the movie, which starred Diane Ladd (the mother of Jurassic Park co-star Laura Dern) and Ralph Sbarge.  Ladd is a scientist who has created dinosaurs via research with genetically modified chickens but one of the subjects escaped and is terrorizing the neighbor desert town, so she teams up with a night watchman at a construction site to track it down.  Things get exponentially weirder from there.  One of the defining aspects of the movie is its practical dinosaurs, designed by John Carl Buechler and they definitely contribute to the schlocky charm of the movie.  Part of Corman’s scheme was to release the movie in theaters on the exact same day as Jurassic Park but it ultimately only released in about 65 theaters that same May in 1993 before mostly being a home video release, followed two sequels and two spin-offs.  You can check out the entire movie below thanks to YouTube.