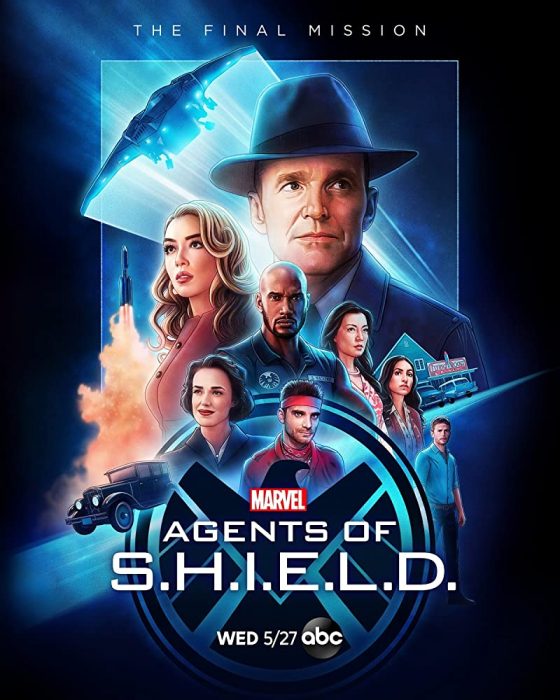 After 7 seasons, Agents of SHIELD has decommissioned the quinjet and shut down the bases as the last surviving MCU show of the old era has come to an end.  There have definitely been some ups and downs in terms of quality and storylines but the characters, especially Clark Gregg, carried things and kept you invested even when the plot arguably wasn’t there.

The show garnered a ton of hype when it premiered back in 2013 as it was a direct continuation of The Avengers film and was bringing back fan-favorite Agent Phil Coulson, played wonderfully through the years by Clark Gregg, who was believed to have been killed in that film by Loki.  There was also the promise of the show weaving in and out of the movies with crossovers and characters but it took until near the end of the first season for the show to really capitalize on that idea.  The first major crossover was insultingly terrible as the SHIELD team arrived to clean up the mess after Thor: The Dark World, which was the first five minutes or so of the episode before the team investigated some uninteresting Asgardian staff.  The first real shot to the arm of Agents of SHIELD was Captain America: Winter Soldier, as the show greatly benefitted from the reveal that Hydra had infiltrated SHIELD and it fueled some excellent end of season 1 episodes and ran into season 2 as now the SHIELD team had a focused mission instead of the sometimes fun/sometimes dumb episodic missions of most of the first season.  It also helped those last few episodes of season 1 that the late great Bill Paxton was the final boss, revealed to be both HYDRA and the puppet master of Grant Ward (Brett Dalton), who was personally recruited by Coulson for the SHIELD team but turned out to be a double agent, which seriously impacted all the characters as their trust in a teammate and friend was shattered.  The tie-ins became fewer and worse as the series went on with the fifth season’s Infinity War “crossover” being especially egregious as the show tried to make their alien invasion storyline seem as important as Thanos and his Black Order, to hilariously terrible results and they didn’t even bother to try and tie things into Endgame and “the snap”, instead saying their timeline was now separate due to all the craziness that occurred in previous seasons.  Despite things like that, the overall strength of the series had improved over the years to counteract a lot of the missteps like that.  The show got a little lost in the weeds through season 3 with an Inhumans focused storyline but the show reached its apex with Season 4, easily the strongest and best season of the show.  Following the format of the comics that inspired it, the season was broken into “arcs” that seamlessly and brilliantly led into one other, going from a Ghost Rider story to evil LMDs to a computer simulation world where HYDRA won, with fantastic guest roles by Gabriel Luna as Robbie Reyes and Mallory Jansen as the evil LMD AIDA.  Along with those two, and the aforementioned Bill Paxton, there were many great guest stars over the years, including Buffy/Angel regulars like J. August Richards and Amy Acker, Jaime Alexander (before she went over to lead Blindspot), Cobie Smulders, Samuel L. Jackson, Kyle Mclachlan, Patton Oswalt, Powers Boothe, Mark Dacascos, and Hayley Atwell, who not only tied into MCU movie history but the excellent Agent Carter show.  This final season brought back another Agent Carter regular, Enver Gjokaj as Agent Daniel Sousa and his charmingly square personality.

As rough as some individual episodes or seasons of Agents of SHIELD were, the cast continued to get stronger and more fun and interesting as the show went on, which became enough to make it through some of the rougher patches.  Clark Gregg was just as great as he was in the movies leading up to SHIELD and was a strong central presence that held things together even in the shaky early episodes.  Ming Na Wen was also great right out of the gate as Melinda May aka The Cavalry and delivered seven seasons of ass-kicking badassery.  The person who really grew the most through the series though was Chloe Bennett as Skye/Daisy Johnson.  Introduced in the first season as what seemed like just blatant eye candy and a love interest for Ward, her character evolved into an expert SHIELD agent, Inhuman superhero and fearless team leader and you could tell Bennett was getting more confident and comfortable as well, getting more elaborate action sequences and growing more charming and cool as the series went on and she became the central character for many of the show’s arcs.  Iain De Caestecker and Elizabeth Henstridge as the seemingly cursed couple of Fitz and Simmons rounded out the core group and while it got kind of ridiculous how often they were separated and reunited, their determination to get back to each other was more compelling than not.  The core team has been rounded out by other agents over the years and they’ve all been mostly great, from Mack (Henry Simmons) and Yo-Yo (Natalia Cordova-Buckley), who have been around since Season 2 and 3 respectively, to Nick Blood and Adrianne Palicki, who played Lance Hunter and Bobbi Morse respectively, who were so good they almost got their own spin-off show to most recently lovable goofball Deke, played by Jeff Ward, and the Dataesque Enoch, played by Joel Stoffer

Agents of SHIELD was the last survivor of the first wave of MCU related television shows now that all the Netflix/Freeform/Hulu shows are canceled or ended (although I guess there’s still Helstrom, but nobody cares about that, right?).  SHIELD was definitely the most ambitious of all those other shows with its direct tie-ins (at least early on) to the MCU and having characters from the movies (again, early on) showing up and while it definitely peaked in Season 4, there was enough fun and goodwill built up with the characters that there was still good times to be had even if it couldn’t hit those highs again.  This last season, with its time travel gimmick, was a ton of fun and the show ended this past week with a thoroughly satisfying climax, not only action/spectacle wise but emotionally as well.  It’s definitely the end of an era but here’s hoping we maybe will see some of these characters sometime in the future.