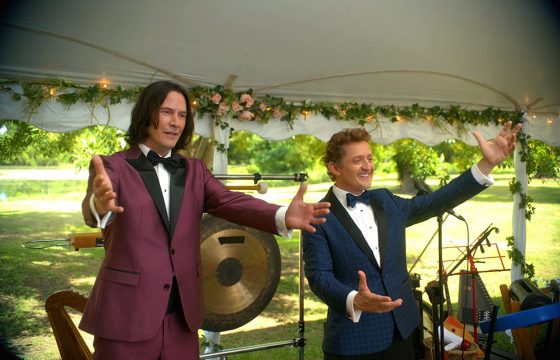 Bill and Ted are finally returning in this weekend’s Bill and Ted Face the Music and even though Wyld Stallyns are destined to unite the universe in peace through music, they’ve gotten a little help from Weezer on the soundtrack with “Beginning of the End”.  The song is actually the fourth single off their upcoming album, Van Weezer, which will be the group’s fourteenth studio album.  As the name might imply, the album is leaning more toward a hard rock/heavy metal vibe than a lot of previous Weezer albums, taking influence from Van Halen, Kiss, Black Sabbath, and Metallica.  A previous single, “Blue Dream” debuted on a recent Simpsons episode, and the entire album is scheduled for May of next year.  For the music video for “Beginning of the End”, Weezer starts out in their normal fashion but gradually becomes more 80s and rocking as the song goes on, eventually getting noticed by the Wyld Stallyns themselves, Alex Winter and Keanu Reeves.  You can hear the song in the movie and on the movie’s soundtrack, both out this Friday and you can check out the music video below.