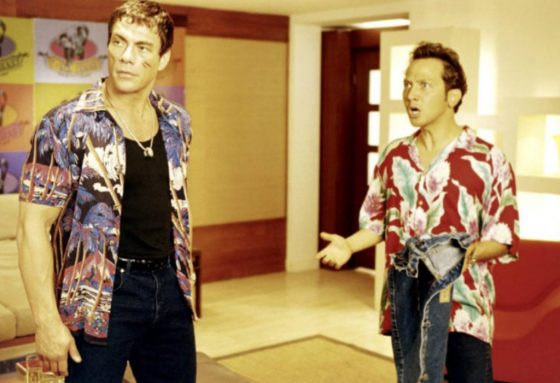 The mid to late 90s saw many Hong Kong action directors arrive in Hollywood looking for a shot to make huge blockbusters. John Woo was the biggest and most successful but there were also directors like Ringo Lam and Tsui Hark.  The one man who worked with all of them was Jean Claude Van Damme and his second film with Tsui Hark was 1998’s Knock Off, their follow-up to the wonderfully absurd Double Team.  Van Damme stars as counterfeiter turned fashion designer Marcus Ray, who has lived in Hong Kong his entire life.  He teams up with his buddy Tommy Hendricks (Rob Schneider) to sell a line of jeans but Marcus soon finds out that Tommy is working for the CIA and that his jeans, and many other products, have been “knocked off” by a dangerous group of Russian terrorists, who are placing tiny but powerful nano bombs in fake goods being shipped out of Hong Kong.  The movie is a visual overload, with basically every type of crazy 90s camera effect you can think of on display, plenty of slo-mo, and blasting techno for the score.  There are plenty of fun scenes though, like a chase/fight through a fruit warehouse district and the finale aboard a cargo ship, where JCVD is constantly doing power slides to take out the bad guys.  You can watch the entire movie below thanks to YouTube.