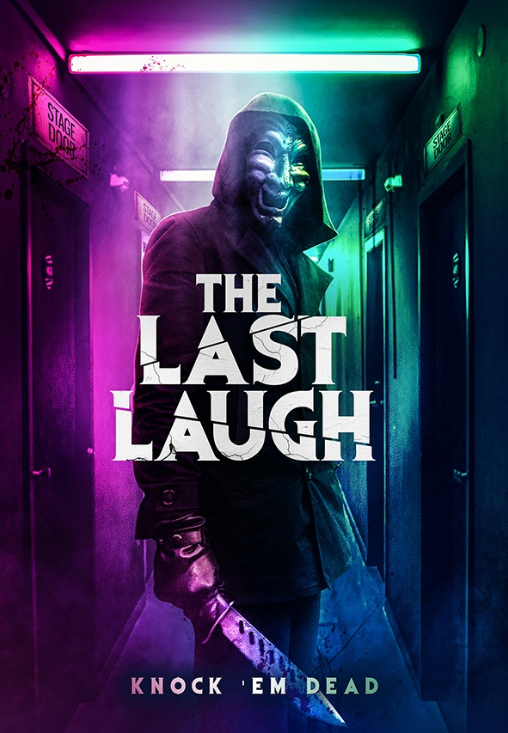 People are starting to get into the fall/Halloween spirit as Pumpkin Spice everything returns and the weather gets colder.  Movie fans usually start watching more horror as well, either old favorites or new offerings and The Last Laugh is a new slasher movie out today (9/15) to rent or buy on VOD.

Directed and written by Jeremy Berg, who previously directed The Invoking and produced Holiday Hell and Hunting Grounds, The Last Laugh stars Steve Vanderzee as stand-up comic Myles Parks, who has the biggest opportunity of his career opening for a big name comedian at a historic theater venue after struggling following the death of his wife and being put on medication.  As Myles gets ready for the show, a masked killer is stalking backstage, killing the various crew members of the theater.  The major issue keeping The Last Laugh from being a great new slasher movie is almost everything outside of the actual kills.  There really isn’t a sense of urgency or concern from Myles until almost an hour into the movie and, even after he finds out there is a killer, he doesn’t do a whole lot to try and get help or stop them himself, even just leaving someone who survived an attack to their doom.  The movie definitely would have benefitted from a more active protagonist and it could have played more with the fact that he’s on meds to keep himself from seeing horrific imagery.  If Myles thought maybe he had gone crazy and was the killer or if there was more of him trying to convince people there is a killer and then not being able to produce evidence, it would have given the movie a much exciting pace and tone.  There’s also a pretty major cop-out at the end that ends the movie on a very disappointing note.  It’s a shame that most of the movie isn’t as exciting as it could have been because the actual slasher scenes are pretty much great across the board.  The killer has a very simple but cool and effective look as they wear a classic “Greek Comedy” mask and a black coat/leather gloves combo.  There are some great practical effects work, mostly involving the killer’s preferred weapon of a hunting knife, and it all looks suitably old-school and in line with the movie’s professed inspiration, which is classic Giallo movies.  The setting is also great with the classic old theater and while it’s used fairly well, it would have been fun to maybe see some of the kills use some more of it, like maybe the classic “drop sandbags” from the boom lights or props from old shows.

Acting-wise, there aren’t any major standouts but no one is particularly made either.  Meranda Long probably gives the best performance as Bethany, one of the theater crew who is obsessed with the creepy and dark history of the theater but also has a fun sense of humor and gives some solid banter with Myles and stage manager Andy (Marcus Leppard).  Steve Vanderzee is fine as Myles but, again, I wish he was a more active protagonist.  He spends most of the movie unaware and just sort of wandering around backstage and I wish there was more focus on him realizing what was going on sooner and then trying to figure out what to do before the theater is full of unsuspecting audience members and less focus on his tragic past.

The Last Laugh is so close to being a fun new slasher movie but it just lacks the urgency and drive to really make it exciting and scary.  The look of the killer and the actual kills are visceral and well done with great old school effects but the time between each one is lacking in a lot of ways.  If you do still want to check it out, it’s out now on VOD to rent or buy.