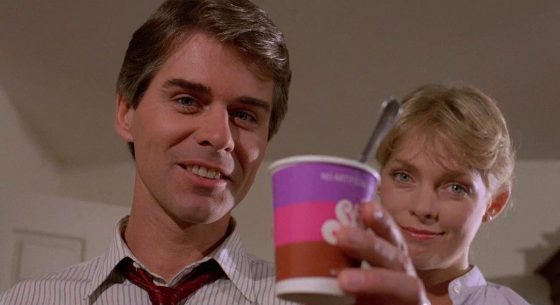 It’s October, which means it’s the best time to dig into old and new horror favorites, and for the first Everything Action theater of October 2020, we have the cult Larry Cohen directed classic, The Stuff.  Arriving in 1985, The Stuff follows the discovery, and subsequent mass marketing, of a mysterious white goo, dubbed “The Stuff”, that becomes a sensation in the world of desserts.  Michael Moriarty plays David Rutherford, who begins to investigate The Stuff for a conglomerate of disgruntle ice cream company heads and eventually teams up with Stuff ad executive Nicole (Andrea Marcovicci) and Jason (Scott Bloom), whose entire family become victims of The Stuff’s brain-eating side effects.  There are lots of fun practical effects and satire about consumerism and fast food and even an appearance by Paul Sorvino is a crazy militia leader who becomes an unlikely ally to the main trio in the fight against The Stuff.  You can watch the whole movie below via Youtube.