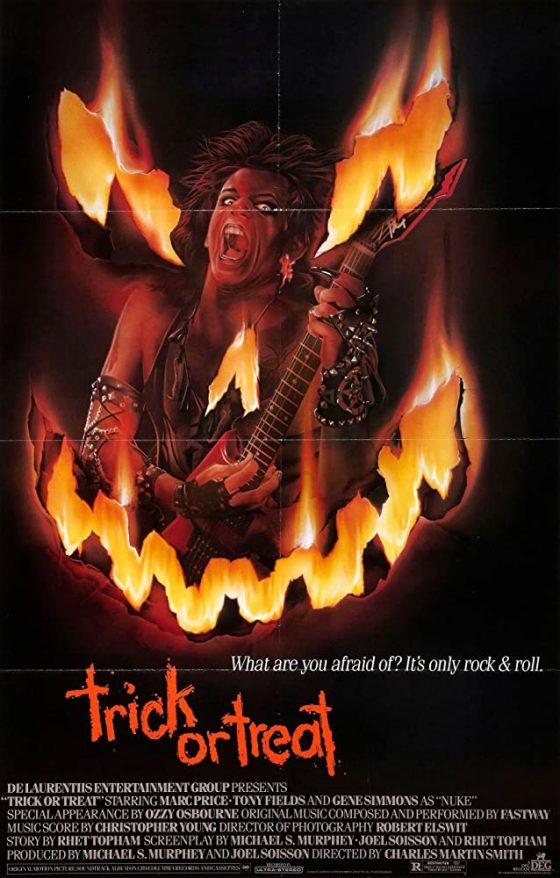 The horror genre has an almost infinite number of sub-genres and one of the ones that sprang up in the 80s was “heavy metal horror”, which usually involved either a heavy metal band summoning some sort of demon or the band themselves being evil.  1986’s Trick or Treat was in the latter category as a young metal fan has to take on the demonic soul of his favorite frontman.  Mark Price stars as Eddie Weinbauer is a massive fan of heavy metal singer Sammi Curr (Tony Fields) and in the process of writing a fan letter to him, Eddie is shocked to hear on the news that Sammi died in a mysterious hotel fire.  Going to visit his friend Nuke, played by Gene Simmons, Nuke gives Eddie an unreleased version of Sammi’s final album.  Eddie listens to it but discovers Sammi’s soul is back from hell and trapped in the record and looking to cause death and destruction.  Ozzy Osbourne shows up in the movie as a televangelist denouncing metal music and the studio originally wanted WASP lead singer Blackie Lawless to play Sammi, but the unfortunately fell through.  All the metal music in the movie was composed by the movie’s composer Christopher Young and the metal band Fastway, which was formed by former Motorhead guitarist “Fast” Eddie Clarke and Peter Way, formerly of the band UFO. Fastway’s fourth studio album was the Trick or Treat soundtrack, which included the title track and a few other songs from the movie.  Check them out below.