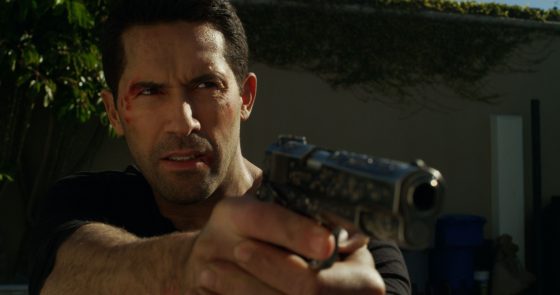 Adkins plays Nero, a former special forces operative who has retired to the Mexican coast with his young son Taylor (Matthew Garbacz).  A local cartel boss named Mzamo (Mario Van Peebles) discovers Nero’s past and kidnaps Taylor and forces Nero into doing a series of escalating missions to take out his rivals for Taylor’s safe return.  The plot is extremely straight-forward and with flourishes like Nero being forced to wear a bulletproof vest with a bodycam on it, it feels like something out of a video game, beating increasingly difficult levels on the way to the final boss.  I don’t think there’s any real commentary about video games and their violence or effect on people or any real social commentary in general.  The plot is mostly just a skeleton to hang the action sequences on and it works well in that aspect. There is a bit of a lull between a couple of the missions, especially the second and third mission Nero is sent on, but it’s nothing that detracts too much from the movie.  The action sequences are all pretty much excellent across the board, although I don’t know if any of them match the heights of previous Florentine/Adkins collaborations, like Ninja II or the Undisputed sequels.  They all are excellently shot though and a lot of them take place in fantastic long takes where you follow Nero through buildings like a restaurant or a night club as he engages in shootouts and hand to hand fights, with the highlight of the movie probably being the 2nd mission nightclub assault, which I would generously call an “homage” to John Wick and not a knock-off as maybe some other people might call it.

Adkins gives a great, solid action hero performance as always with a blend of cocky British attitude and seriousness when needed.  Mario Van Peebles is devouring scenery and it’s always great to see him and he gives Mzamo a lot of personality and charisma but also more depth than you might expect as the movie progresses.  No one else really stands out too much in the cast but considering most of the rest of the cast is faceless goons to be killed by Adkins, there’s not too much to complain about.

Reunited with one of his go-to directors, this is a fun, solid entry in the Scott Adkins catalog.  It’s definitely a huge step up from one of his more recent movies, Legacy of Lies, but it doesn’t quite hit the absolute highs of previous Florentine collabs like Ninja II or the Undisputed sequels where Adkins plays Boyka.  If you’re an Adkins fan looking for some cool action sequences, definitely check out Seized, which is out now on DVD, Digital, and On-Demand.

Action Hero of the Week: Nero