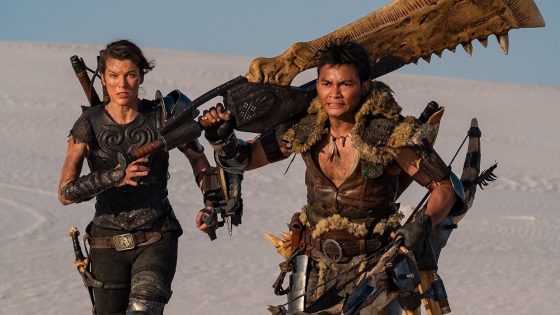 From the man who brought you the Mortal Kombat and Resident Evil movies, Paul WS Anderson returns to the world of games for the big screen adaptation of Monster Hunter.  Based on the wildly popular franchise by Capcom, Milla Jovovich stars as Captain Artemis, the leader of a sqaud of soldiers (TI Harris, Meagan Good, Diego Boneta) that are transported from the Middle East to an alternate world populated by gigantic monsters.  The squad soon finds their weapons are mostly useless but they meet the mysterious Hunter (Tony Jaa), who has the skills and weaponry to fight and survive against the creatures.  Artemis and her squad team with Hunter to find a way back to Earth and shutdown the portal that brought them to this new world so the creatures stay where they are.  It definitely has a sort of Pacific Rim vibe (even featuring Ron Perlman at some point according to the plot description and IMDB) and all the creatures are, as far as we know, all featured in the games.  Hopefully, this leans more toward the Mortal Kombat side of Paul WS Anderson’s gaming movies and we’ll find out at the end of the year, as Monter Hunter has a December 30th release date.  Check out the trailer below.