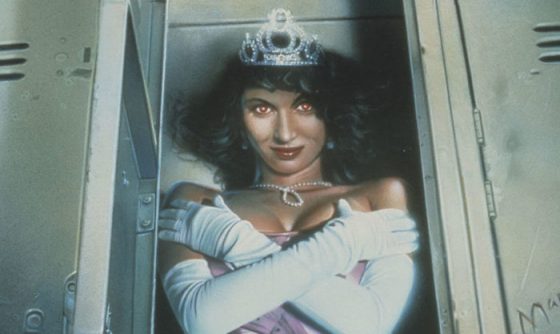 Origins: Mary Lou is a popular high school girl in 1957 who is obsessed with being crowned prom queen.  While at prom, she sneaks away from her date Billy to make out with another boy named Buddy.  Hurt and angry, Billy decides to play a prank on Mary Lou by throwing a stink bomb at her just as she’s being crowned prom queen.  Mary Lou’s dress catches fire and she is burned alive but her evil spirit remains trapped in her prom accessories, such as her prom crown and sash.  In 1987, a young girl named Vicki Carpenter unwittingly unleashes Mary Lou’s spirit, which begins to kill Vicki’s friends and eventually possesses Vicki herself as a way to get revenge.

Weapon(s) of Choice: Magical powers or whatever is on hand