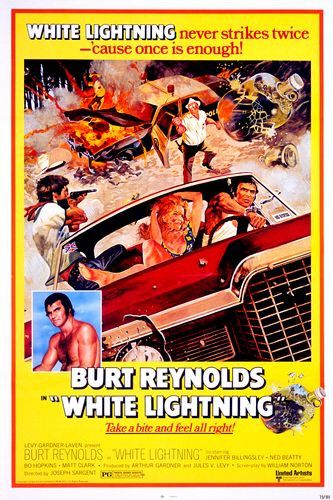 Some of Sterling Archer’s favorite movies, Burt Reynolds’ duology of 1973’s White Lightning and 1976’s Gator are some of his most fun action/comedy movies, although probably overshadowed a bit by the more popular and more widely recognized Smokey and The Bandit, which came out the year after Gator in 1977 and became a box office juggernaut.  In both White Lightning and Gator, Reynolds stars as Gator McClusky, a hard-fighting ex-con, and moonshiner who is twice recruited by government agents to take down Southern crime bosses with his particular brand of swagger.  The movies feature tons of car chases, fistfights, and explosions as Gator battled first Ned Beatty and then Jerry Reed.  Reynolds made his directorial debut with Gator and, along with many references on Archer, including a full-on homage episode with “Pipeline Fever” in Season 2, Quentin Tarantino also paid homage by using some of the White Lightning score by Charles Bernstein in Kill Bill Vol. 1 and Inglourious Basterds.  You can watch both movies below thanks to YouTube.