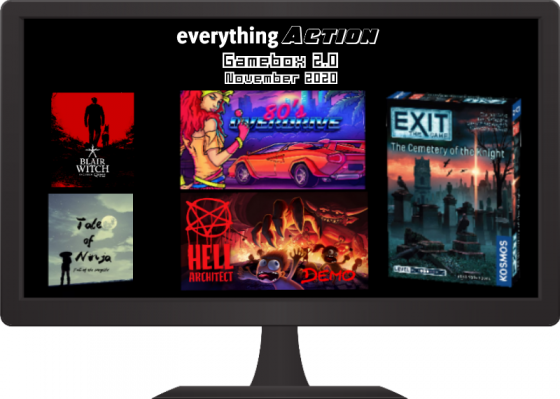 While a lot of folks are digging into the PS5 or Xbox Series X or waiting out to get one, there’s still plenty of things to play now. For this month’s Gamebox 2.0, we faced the Blair Witch in VR, solved puzzles in a cemetery with the latest Exit board game, raced across 80s highways, and more!  Check out what we’ve played recently below.

80s Overdrive (Zach): If you’re a fan of Outrun and other old school 8 and 16-bit racing games, then 80s Overdrive from Insane Code is going to be a must-play!  Featuring gorgeous retro graphics that throwback to the classics while doing things they couldn’t even dream of back in the day, 80s Overdrive has you racing across the highways of a neon-drenched 80s world, trying to earn enough cash to upgrade your supercar or buy a new and better one.  The game features point-to-point racing where you aren’t completing laps around a track, but you are trying to make it to the finish line for that section of the road.  Each race costs a certain amount of money to enter and the amount increases as you unlock each one, so you have to win, or at least place in the top 3, to proceed (although you can suffer the indignity of washing other racers cars if you get low on cash).  You can upgrade your car and also buy power-ups like nitro or radar to track police and you also have to manage gas and damage. Both gas and damage levels carry over and factor into each race. 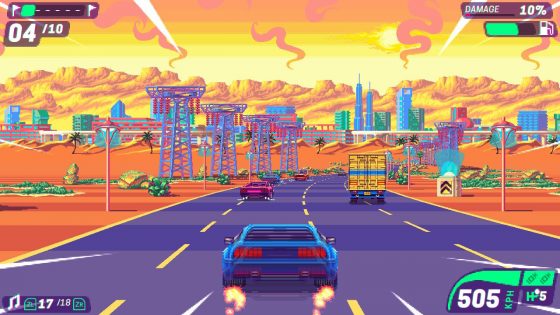 The tracks aren’t the most tricky as far as turns or precision driving but you will need to keep an eye out for splits in the road and your fellow racers and random traffic.  Hitting anything will damage your car and slow you to a crawl, which usually results in you losing multiple valuable spots in the race.  Powering you through each race is an excellent synthwave soundtrack featuring 18 songs you can select from at the beginning of each race and cycle through during the race using the triggers on your controller.  In addition to the career mode, you can also do a time attack mode or even create your own track.  The game is out now on Steam and Switch.

Hell Architect – Demo Version (Chris): When Lucifer is too busy to manage Hell, he gets hires a new architect to get the place in order. Woodland Games and Playway Games invite gamers to construct and manage a devilish paradise. Hell Architect is a simulation title that follows classic building mechanics with cheeky designs. Players are given the task by Lucifer’s managers to basically give the place a new makeover and turn the place into an efficient torture machine.

In the demo version, a brief tutorial level is playable that shows off some of the basic mechanics. The player is tasked with a few humans to collect resources and establish a few buildings around the place. There are resources to harvest in the surrounding: Dirt, Coal, Metal, Steel, Blue and Green Crystals. All of these must be dug up by the human workers. Very basic structures need mostly Dirt, which is found everywhere. This can build stuff like Ladders and Floors and can change up the landscape quite a bit. The rest of the available natural resources are scattered around the area, needs some thinking to open pathways to mine them.

The humans themselves also produce the Suffering resource, which comes from humans getting punished in various torture chambers.  In order to get the maximum potential out of the humans, their needs have to be met. The humans each have different stats and traits, but all need food and sleep, and a prefer torment level. In the demo, only the starter bed is available, as well as structures that (grossly) produce food and drinks. The only torture device that can be readily made is a simple Iron Maiden, which slowly afflicts its occupant.

The demo holds back on showing the mature comedy elements but gives a small preview of the core management systems. The gameplay follows a classic design with fluid controls that feels like Ant Simulator meets Prison Architect. Hell Architect has the potential to be a fun addictive title that can play very well with the right audience. The demo is available now on Steam and is aiming to be released in 2021. 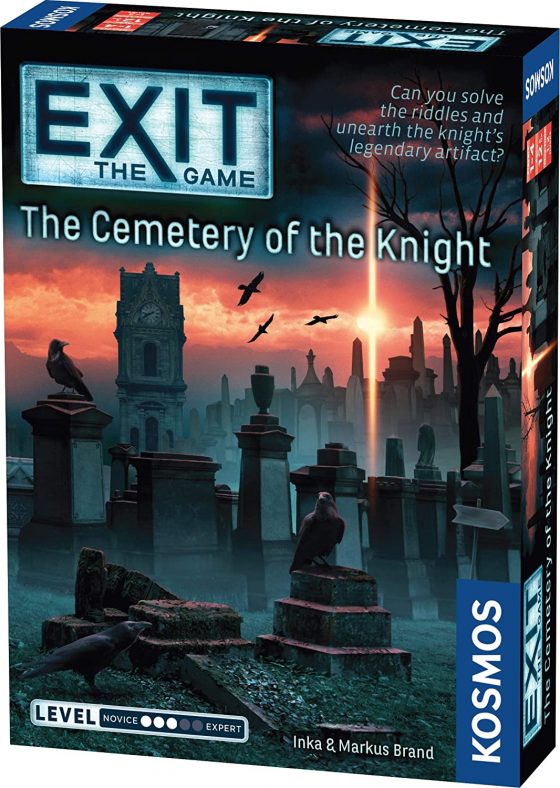 Exit the Game: The Cemetery of the Knight (Zach): One of the newest games in the Exit line of escape room style board games, The Cemetery of the Knight features a fantastic theme, but some of the puzzles this time are a little too obtuse, at least in my opinion.  The setup for this Exit game puts the player as a treasure hunter, seeking a legendary ruby located in the tomb of the knight Sir Reginald Wreston. Time is ticking away as the only night you can attempt to find the gem is tonight because the moon is at the right position which happens only every 87 years, and the moonlight reveals the secret tomb. The game uses the same brilliant card system of all the Exit games, which is easily the best system of progression I’ve played for the “escape room” board game genre.  Some other games use a fancier electronic system or some other way of showing if you are right or not but the cards are a quick and easy way to determine if you are on the right track or not and the hint system and the way it doles out the new clues is also great.  The game also uses the standard “decoder wheel” for when you believe you have the correct three-digit code related to the particular clue you are trying to solve. 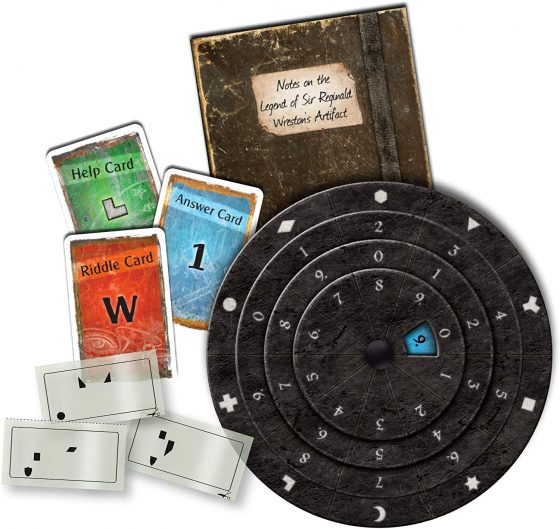 This particular game really makes use of the game’s box and some other clever uses of the in-box material, including a sort of “grand finale” that involves folding cardboard.  I did find some of the solutions a little obtuse or requiring a bit more thinking about what specifically the designer was looking for, kind of reminiscent of the more frustrating puzzles from classic PC point and click adventure games.  Without spoiling anything, there’s a solution that involves pronouncing words that is maybe the worst solution I’ve ever seen in the Exit series.  There are also quite a few that involve figuring out the very precise way that a certain solution needs to be read or created that was a little frustrating.  Overall, not my favorite in the Exit series but the balance of frustrating puzzles to clever ones is balanced out enough that it’s still worth checking out if you’re looking for a new game in the series to play.  It’s out now wherever you buy board games, including Amazon: https://amzn.to/2II6nZp

Blair Witch: Oculus Quest Edition (Zach): As if the Blair Witch wasn’t scary enough on regular consoles, you can now head into the Black Hills Forest in VR with the Oculus Quest version of the recent Blair Witch game.  You step into the shoes of Ellis, a troubled cop and former soldier suffering from PTSD who joins the hunt into the Black Hills Forest to find a lost boy.  Joined by his trusty dog Bullet (who you can totally pet and play with in VR), Ellis heads deep into the woods but gets drawn into the dark evil of the Blair Witch and his own nightmares and past.

The game is in the “walking sim” style game where things are incredibly story-driven and you are moving forward through each chapter without too much deviation from the main path.  You can wander around and explore, especially now that it’s in VR, but there is the main path that the game wants you to follow.  Puzzle-solving comes in the form of videotapes that Ellis finds.  After discovering an old camcorder, Ellis finds tapes and is shocked to learn that the tapes seem to be able to manipulate the environment, so you have to fast forward and rewind the tapes and find the area that the tape is showing to solve the puzzles.  For instance, there’s a massive tree blocking a path but you can find a tape that shows it falling down, so you can rewind the tape to the point where the tree is still standing and get past because now it’s back standing upright in the present. 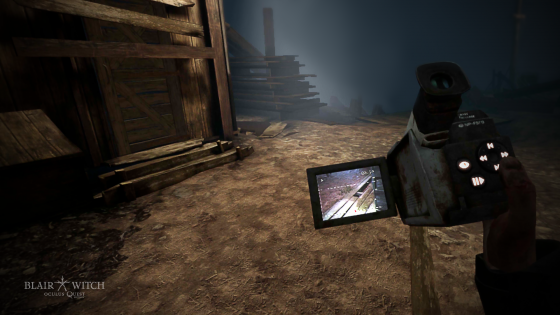 Your other main puzzle-solving tool is Bullet, who you can send out to find clues or he will sometimes bring you objects. As the story progresses Bullet can get a scent from objects and then you follow him to wherever the scent leads. There is also some combat as you face off against the evil in the woods and it feels a bit like Alan Wake-lite as you have to use your flashlight to shine it on the enemy as they appear, with Bullet growling and facing where you need to be looking.

The game seems like it might have taken a bit of a graphical hit coming to Quest, as the environments and details are maybe not as sharp as they were on the regular consoles but the trade-off is obviously that you are now fully immersed in the Black Hills Forest and you definitely get creeped out, especially when you are in the woods at night and the binaural audio is surrounding you with creepy noises.  If you have a Quest, or the new Quest 2, and are looking for a spooky experience, Blair Witch is definitely worth checking out.

Tale of Ninja: Fall of the Miyoshi – Early Access Version (Chris): S.Y Games takes players back to the Sengoku period of Japan and puts them into the role of a ninja in Tale of Ninja: Fall of the Miyoshi. This game is an action-adventure game that looks and feels something like a rough draft of a Tenchu game. In this early access version, the player controls an unnamed ninja who is tasked with carrying out missions for their master, all to weaken the Miyoshi clan for the Shogun.

Plot aside, it is expected an early access title to have some unpolished features, this game sadly lacks some key aspects to make the playtime enjoyable. The game has an open-world design that lets players explore the map and interact with NPCs, but it’s a little too big to show off very little details. The UIs feel very rough and have that student project quality. For a ninja game, it is extremely hard to even come close to a silent kill in this version. Fighting is just running at the enemy and swing a sword, hoping for the best. And the main character’s run animation has a hilariously weird Naruto run that just takes the player further out of the experience.

While this early access build should have been worked on more before release, the developers have been updating their steam page for their latest updates and addressing the first wave of responses. There are a few fun ideas and concepts hidden behind clunky gameplay. A handful of the 3D assets look kind of good and show a promising environment to explore. It is hard to recommend this title for anyone to pick up and play what feels like a playable demo at this point. However, S.Y Games is new and if you want to support their work, you can check out this version now on Steam.