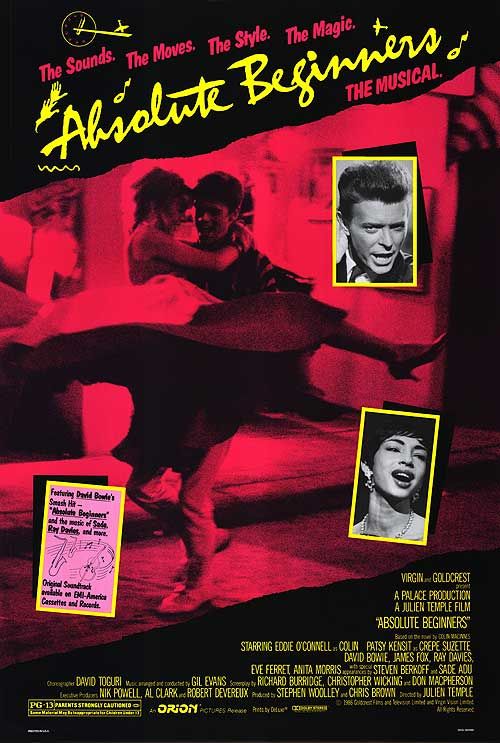 A deep cut mid-80s musical drama, Absolute Beginners co-starred the great David Bowie, who provided the movie it’s title track.  The movie was set in London in the 1958 against the backdrop of the Notting Hill race riots and follows a young photographer named Colin (Eddie O’Connell), who falls in love with a model named Crepe Suzette (Patsy Kensit), who is focused more on her career.  Bowie plays Vendice Partners, a marketing promoter who Colin goes to in an attempt to boost his career and impress Crepe.  The movie was a box office bomb and part of the reason for it may be the that the studio that produced it, Goldencrest Films, who had multiple movies that went over schedule and over budget, Absolute Beginners being one of them.  Since Bowie co-starred, he also contributed the title track, “Absolute Beginners”, which was a much bigger hit than the movie.  The song was huge in the UK and it stayed on the charts for nine weeks, peaking at #2.  It wasn’t as big in the US, peaking outside the top 40 on the Billboard charts at #53.  The movie’s director, Julien Temple, directed the music video as well, which goes for a black & white noir look as Bowie dashingly walks around London in a trench coat and frequently encounters a model with zebra stripes.  Footage from the movie is included as well.  Check it out below.