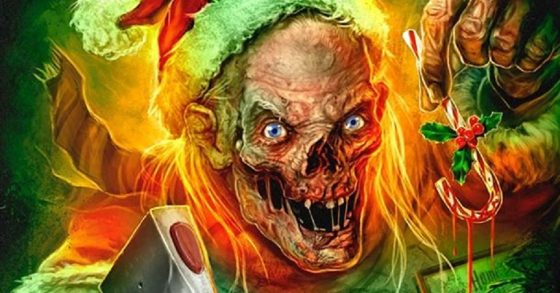 Some younger pop culture fans probably don’t realize how massive Tales from the Crypt was back in the 90s, especially since it’s still not streaming anywhere.  Besides being a critical and ratings hit, the Cryptkeeper, voiced by John Kassir, became a pop culture icon, appearing outside of the show in various appearances, like a cameo in Casper.  There were books, games, action figures, and tons of other merchandise, including a Christmas album from 1994.  Have Yourself a Scary Little Christmas was an album full of gruesome parodies of holiday favorites, all sung by the Cryptkeeper/Kassir and included songs like “We Wish You’d Bury the Misses“, “T’was the Fright Before Christmas‘, “Twelve Days of Cryptmas” the spiritual sequel to “The Crypt Jam”, “Christmas Rap” and the title track “Have Yourself a Scary Little Christmas”.  The album came out during the show’s sixth season, which was toward the end of its run.  All the pun-filled madness is available to listen to below with an upload of the whole album on YouTube.