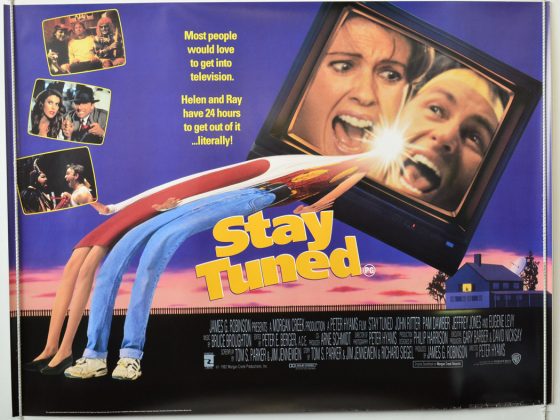 We did a commentary on it this year but now you can watch Stay Tuned in full for the latest (and last of 2020) Everything Action Theater.  Starring John Ritter and Pam Dawber as Roy and Helen Knable, a couple having marriage issues that mostly stem from Roy’s obsession with television to the exclusion of almost everything else in his life.  Their issues are exacerbated when a salesman named Spike (Jeffrey Jones) arrives and sells Roy and ridiculously massive satellite system.  The Knables soon learn however that the satellite is actually a transmitter to Hell and Spike is a TV executive for Satan himself.  The Knables are thrown into a gauntlet of hellish TV parodies but if they can survive for 24 hours, they are free to leave.  There are tons of nods to 90s pop culture, including Duane’s Underworld, Silencer of the Lambs, and HTV instead of MTV, which includes a full music video from Salt n Pepa. There’s also a legitimately great Chuck Jones animated segment that is one of the highlights of the movie.  You can check out the entire movie below thanks to YouTube.