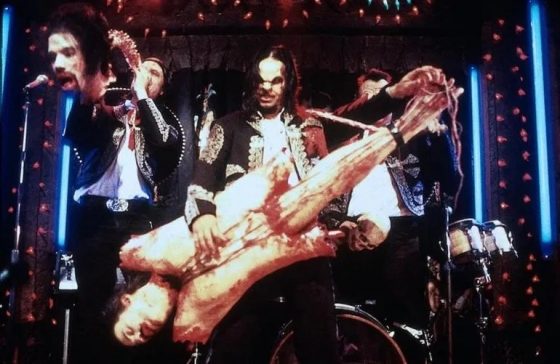 From Dusk Till Dawn celebrates its 25th anniversary this week and one of the things that gave that movie its unique sense of style was the music by Tito & Tarantula.  Founded in Hollywood in 1992 by Tito Larriva, who was in a band prior called the Cruzados, who opened for bands like INXS and Fleetwood Mac in the 80s.  With guitarist Peter Atanasoff aka “Tarantula”, they first joined Robert Rodriguez for Desperado, contributing the songs “Back to the House That Love Built”, “Strange Face of Love”, and “White Train” and Larriva appeared in the film as well.  The band blew up in 1996 after appearing in From Dusk Till Dawn as the house band for the Titty Twister and playing for Salma Hayek’s Santanico Pandemonium in her iconic dance scene.  After From Dusk Till Dawn, the band released their first album, Tarantism, and have continued together to this day, releasing their most recent album 8 Arms to Hold You, in 2019.  “After Dark” is the song that plays during the Titty Twister dance sequence in From Dusk Till Dawn and has become the official theme of the series for the sequels and the television series.  The band recorded a music video for the song to go along with the movie and you can check it out below.

From Dusk Till Dawn: The Series Trailer