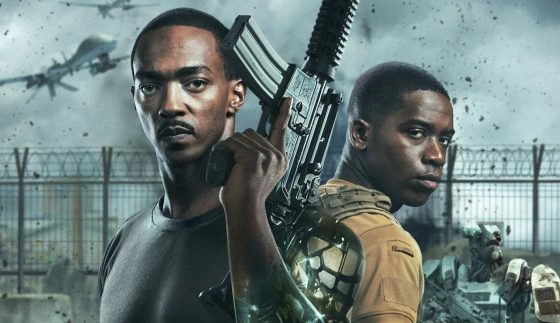 Netflix kicks off the new year with one of their first big action blockbusters, Outside the Wire, which stars Anthony Mackie as an android super-soldier.

Set in the year 2036, a war has broken out in Eastern Europe and the US has placed itself in the middle of the conflict between Russian mercenaries operating under the command of the nefarious Victor Koval (Pilou Asbæk) and Ukraine.  Damon Idris, from FX’s show Snowfall, plays drone pilot Lt. Harp, who disobeys a direct order and launches a missile to destroy a vehicle he believes is carrying a missile launcher.  He saves 38 Marines but kills two and, as punishment, he is sent to the frontlines in Ukraine, where he is placed under the command of Captain Leo (Anthony Mackie) who turns out to be a highly advanced combat android.  There are robotic troops called “Gumps” that are also deployed in the combat as well but Leo looks and acts human while the Gumps are bulky faceless weapons.  Leo informs Harp that Koval is after a Soviet-era system of nuclear weapons and will launch an attack on the US mainland if they don’t stop him.  The plot is fairly generic although it does try to throw in quite a few twists in rapid succession for the third act but it doesn’t really do that great of a job of seeding them throughout.  When the twists start occurring, they try to prove their point with flashbacks to earlier in the movie but it’s definitely more telling than showing as there’s a lot of characters just giving exposition about what is happening.  There’s also a lot of well-worn territory as far as “what does it mean to be human?” between Leo and Harp that goes all the way back to Blade Runner and before and they definitely emphasize that Harp starts as the more cold and calculating member of their partnership while Leo’s robot is more human in nature, cracking jokes and emphasizing with the local militia fighting Koval’s mercenaries.  That idea unfortunately doesn’t really help Damon Idris, who comes across fairly flat and uninteresting as a lead for most of the movie.  Another disappointment is Emily Beecham, who was fantastic in Into the Badlands but has almost nothing to do here and her character is pretty ill-defined and flat, despite being someone we’re supposed to assume is important to Leo and possibly a factor in the twists that occur.

The action in Outside the Wire is fairly solid throughout, although it takes until probably a midpoint action sequence at a bank under siege before you get to see Leo’s super-soldier prowess in action.  When he uses his abilities, he’s super fast and super powerful and precise and it feels a bit like what we saw in Upgrade, although nowhere near as inventive visually or viscerally as Leigh Whannell’s underrated gem.  Besides the ability to absorb more damage and having translucent skin at times, there really aren’t any other cool powers or tech shown off for Leo and besides the Gumps, there isn’t a whole lot of other interesting future tech either.  The drones are still the standard Predator drones and the guns and military tech are all still what is probably being used now.  Granted it’s only 15 years into the future but you would think there would be some new advances in warfare in that time like what you see in stuff like Call of Duty Advanced Warfare or something.  The way the Gumps look and move also calls to mind things like Neil Blomkamp movies but Outside the Wire lacks any of the personality of something like District 9 or even Chappie.  It’s almost as if imagine if something like Chappie was a cool foreign movie and this is the generic Hollywood remake.

Outside the Wire is a decent Netflix action movie but doesn’t reach the heights of something like Extraction.  There’s some solid action but it feels generic as far as the plot and feels lacking in its vision of cool future military tech.  If this had been a theatrical release, it would have definitely been much more disappointing but as a Netflix movie you can enjoy from home whenever it’s a decent way to spend two hours and if you’re a fan of Anthony Mackie, he’s definitely the best part.