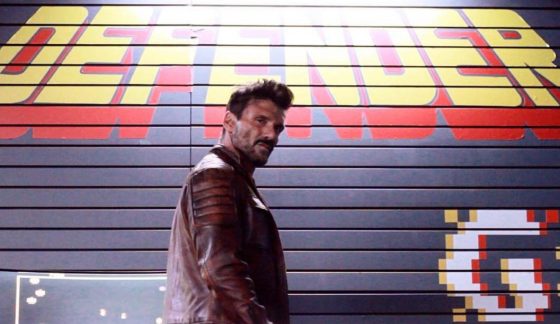 Officially announced in 2017 and originally planned for a 2019 release, Joe Carnahan’s latest film Boss Level has hit some delays but it will finally arrive this coming March as a Hulu exclusive.  Frank Grillo stars as Roy Pulver, a special forces soldier who becomes caught in a time loop on the day that he is murdered.  He relives the same day each time he dies and eventually finds out the secret to his predicament is tied to a secret government project led by the nefarious Col. Ventor (Mel Gibson), who has an army of assassins out to prevent Roy from discovering the truth and ending the loop.  Naomi Watts co-stars as Roy’s ex-wife who he is determined to save and Michelle Yeoh plays a sword master who teaches Roy the skills needed to take out at least one of the assassins.  Will Sasso, Rashad Evans, Rampage Jackson, and Selina Lo are some of the assassins and Ken Jeong, Rob Gronkowski, Annabelle Wallis, Mathilde Ollivier, and Meadow Williams appear as well.  It looks like a blast, leaning into some Crank level mayhem with the fun of a time loop movie like Happy Death Day or Edge of Tomorrow.  The movie is available on March 5th on Hulu and you can check out the trailer below.