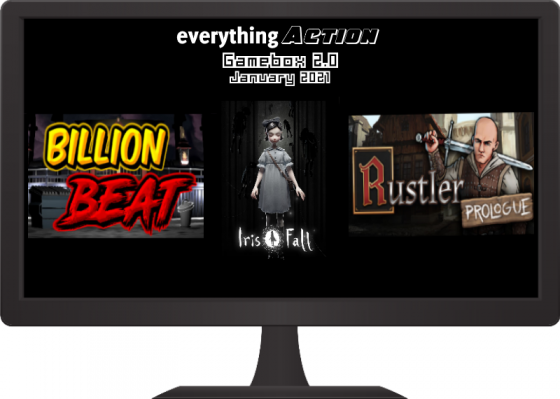 2021 has arrived and we hope it brings new and exciting things. In our January game reviews, we started off the year right with some interesting indie titles to get ready for more gaming throughout 2021 We went stepped into the boxing ring to earn fame and fortune in Billion Beat, explored a spooky theater with lights and shadows in Iris.Fall, and was a medieval bully in Rustler: Prologue. Read below for our reviews.

Iris.Fall (Chris) Developed by NeXT Studios and published by PM Studios, Iris.Fall is an adventure puzzler title that explores an illusory world thru lights and shadows. The player takes control of a young girl named Iris, who falls asleep and finds herself in a twisted fantasy. Iris explores a dilapidated theater with eerie marionette dolls, broken walkways, and strange machinery. Guiding her on the adventure is a shadowy black cat, helping Iris overcome cryptic puzzles and closer to solving her dream’s mystery.

The gameplay involves moving Iris to dark and spooky locations to discover and solve different puzzle challenges. There are a handful of matching titles, rotating spheres, and circuit connecting sequences, but the game’s highlight puzzle mechanic is a light and shadow system. At certain challenges, Iris can transport herself into a shadow reality to reach disjointed locations. By lining up objects and shining a light, Iris can make shadow connections to travel and complete tasks. The mechanic is cleverly used in the game, appearing in diverse forms with increasingly difficultly. 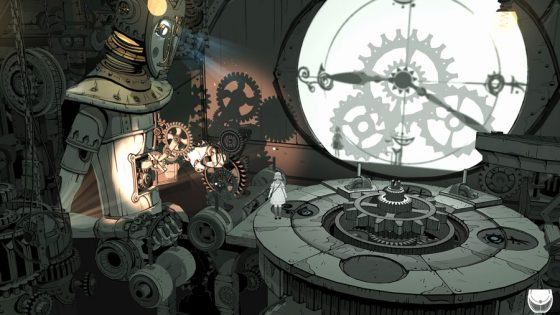 The narration of the game is kept at a minimum as there is no spoken or written dialogue. Animated hand-drawn and in-game cut scenes unfold more about the plot as Iris continues her adventure. But the subtle storytelling works well with the game. Like a dream, the open interpretations of visuals and actions makes the player think a little more. The gothic setting makes the game have an air of suspense that makes solving each challenge rewarding.

The game has captivating visuals and challenging puzzles, but the game is on the short side. There is a healthy mix of simple brain teasers and head-scratching moments. But the game moves to focus on solving one puzzle at a time. There are no long fetch quests or hidden items that make the player travel revisit old selections. Iris.Fall allows its haunting atmospheric world to take center stage and delivery a compact, but fun gaming experience. Iris.Fall is available for Switch, PS4, Xbox One, and PC.

Billion Beat (Zach): If you’re looking for something that captures the fun of Punch-Out!, Billion Beat from Dronami is definitely something to check out.  Set in a bizarre world inhabited by strange creatures, you play as a fighter whose family is threatened because he owes a billion bucks to the local crime boss.  The only way to earn that amount of cash is to enter the Billion Beat boxing tournament and fight his way to the top.  The game will feel pretty familiar if you played Super Punch-Out back in the day on the SNES as you’ll view the action from behind your character, who becomes transparent so you can see your opponent.  You can do left and right body blows and jabs and you can build up energy with successful punches and dodges to unleash more powerful body blows and uppercuts.  One of the things that sets Billion Beat apart from it’s inspiration is that there is much more emphasis on how you perform.  You build up a combo meter with successive punches and you lose the combo if you get hit or whiff on a punch and there is a much great emphasis on counter punching and dodging. If you just mash the attack button or don’t dodge and then attack, you will probably either find your attacks getting blocked and killing your combo or you may only get one punch.  If you dodge and then attack, you’re able to do combos and do more damage to your opponent.  At the end of a match, you are are rated on a wide variety of categories such as style, speed and amount of combos.  The better your rating, the more money and the more experience you gain. 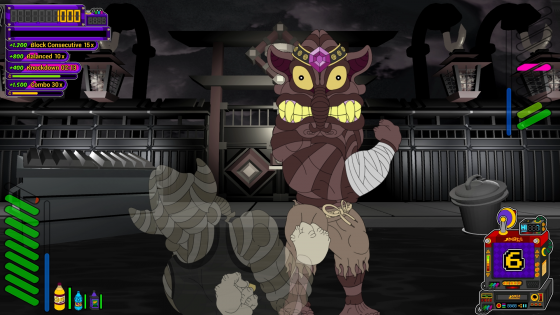 The experience you gain levels up your fists and you can use upgrade points to increase their power, the amount of charge, the amount of “hype” or money you gain and more.  It’s definitely much more in-depth than what Punch-Out! did back in the day and it’s interesting to tailor your fists to your play style.  If you favor one over the other, you can level it up and pump it’s power to make it a devastating weapon. You can also buy “Dranx” which are different power-ups that you can utilize in a fight to gain health back or get a temporary boost and you can use your money that you earn to buy advice from your mascot/coach as well.  In the story mode, you’ll play through three different circuits and each circuit ends with a boss rush tournament where you’ll have to beat each opponent you faced before again without any breaks.  You can also replay any opponent again to try and get a better ranking and grind for money. The character design and setting is also pretty great and definitely has an Adult Swim style vibe and the opponents are all unique with different gimmicks and fighting styles.  There’s a tall guy you’ll fight who turns out to be two short guys, for example, and once they split up, you have to fight both them as they tag in and out and uppercuts and jabs will no longer work because they will go over their heads.  There’s also great damage to them as the fight continues, like punching off their wigs or knocking out their teeth.  Since it’s been over 12 years since the last Punch-Out! game from Nintendo, Billion Beat is a great alternative to get some rhythmic boxing action and it’s out now on Steam.

Rustler: Prologue (Zach): Rustler from Modus Games is coming to Early Access on Steam on February 18th but you can get a taste of the game for free right now with the free Rustler: Prologue on Steam.Basically Grand Theft Auto in a medieval setting, you play as a horse thief named Guy who complete jobs, kills knights, drinks himself into a stupor and gets into other medieval shenanigans.  The game plays like the OG Grand Theft Autos that came out before GTA III as it’s a top down perspective.  The game is obviously open world but there are missions to complete to progress the story.  You can fight with your fists or find weapons throughout the world and you can steal a variety of horses and carts. 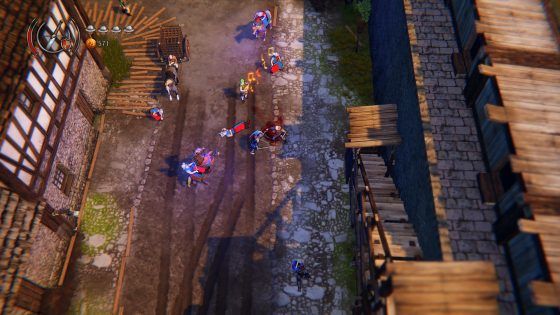 Like GTA, there’s a “wanted” system where you can gain the attention of the local guards and you’ll need to visit a “Pimp My Horse” stall to lose their attention of you’re on a horse.  The game is full of wacky, anachronistic humor and leans fully into the GTA styling, from graffiti on the walls to rapping bards to modern street signs and “horse parking” lots.  It’s fantastically realized and makes it fun to continue to story to see the humor and pop culture references.  The controls are a little tricky, especially if you never played the OG GTA games, as they are sort of tank controls but relative to the screen and you use the WASD keys to move while aiming with the mouse.  Combat takes some getting used to as well, especially the parry where you have to time and hold the right mouse button on incoming attacks.  It doesn’t take too long to get used to both sets of controls and soon you’ll be outrunning the cops and beating down villagers with relative ease.  This first taste of the game seems great and if you’re looking for something that has GTA or Postal style humor in a medieval setting, definitely check out this free prologue and keep an eye out for the game in February on Steam.