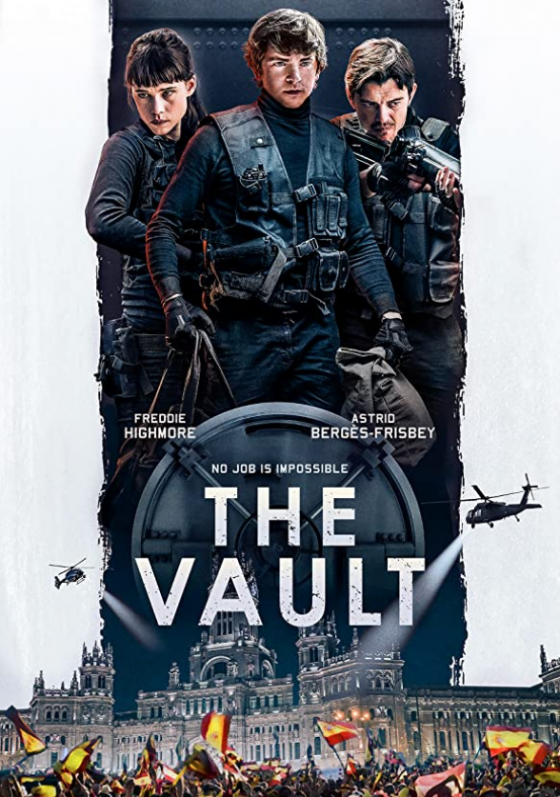 Coming in March from Saban Films, The Vault seems like a solid new heist movie featuring Freddie Highmore, Liam Cunningham and Astrid Berges-Frisbey.  Highmore plays engineering student Thom, who gets pulled into a heist crew assembled by Walter (Cunningham) to try and steal an extremely valuable lost treasure that will be in the Bank of Spain’s vault for 10 days.  The Bank of Spain’s vault has no known blueprints and is a marvel of security engineering, including an underground river that will flood the vault if it is breached.  With the 2010 World Cup providing just over 100 minutes of opportunity, Thom has to use his brilliant engineering knowledge to come up with a plan to breach the vault and steal the treasure.  Astrid Berges-Frisbey is the team’s planning expert and Jose Coronado, Sam Riley and Luis Tosar round out the crew with Famke Janssen appearing as well.  The movie is directed by Jaume Balagueró, who is best known for writing and direct the Rec series of found footage horror movies.  There looks to be some fun Ocean’s/Mission: Impossible-style heist stuff going on and it will be available on Digital and On Demand on March 26th. Check out the trailer below.

Re-Enter the Drift in March On Netflix For Pacific Rim: The Black (Trailer)