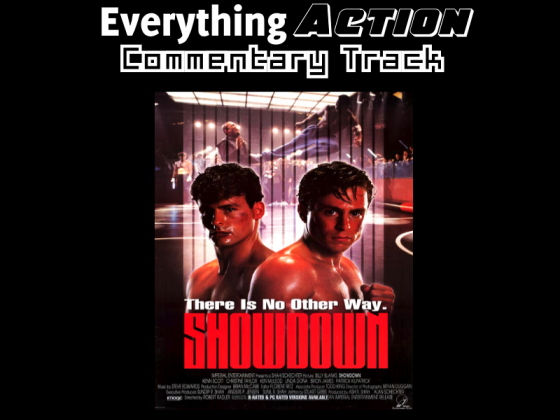 Blanks plays former cop Billy Grant, who quit the force after the death of a “kid” at a house party and is now the janitor at a school that seems like a parody of something like Dangerous Minds but run by a psychotic, martial arts preppy named Tom (Ken McLeod), who has a toxic iron grip on his girlfriend Julie (Christine Taylor).  A new student, Ken (Ken Scott) shows up, starts making eyes at Julie, and becomes the target of beatdowns from Tom.  Billy intervenes and starts training Ken in the art of martial arts.  And that’s not even getting into the illegal underground fighting ring being run by Tom’s maniacal sensei Lee (Patrick Kilpatrick).  The guys try to figure out the tone of the school, why Lee holds illegal fights in his dojo and also has assassins on call, how a very slight fall onto some stairs can kill someone, why the movie is R rated, if Brion James just improved everything and more.  Showdown is available to stream on Prime Video and you can sync it up with the commentary below to watch along with the Everything Action crew.