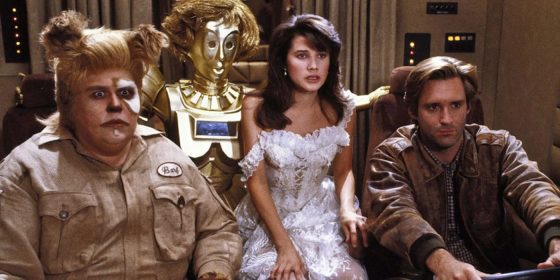 Blazing Saddles and Young Frankenstein usually vie for the title of Best Mel Brooks Movie but, personally, I have always loved Spaceballs.  Coming out ten years after A New Hope (and actually the entire Star Wars Trilogy), Spaceballs skewered Star Wars specifically but sci-fi in general, with homages and parodies of stuff like Planet of the Apes, Alien, and more.  Rugged mercenary Lone Starr (Bill Pullman) and his trusty sidekick Barf (John Candy) are hired to bring back rebellious Princess Vespa (Daphne Zuniga), who flees her arranged wedding with her droid Dot Matrix (Joan Rivers).  Unfortunately for Lone Starr and Barf, the evil Spaceballs are also looking to find Princess Vespa in order to hold her for ransom so they can steal the air from Vespa’s home planet of Druidia.  The Spaceballs are led by the villainous Dark Helmet (Rick Moranis) and his second in command Colonel Sandurz (George Wyner).  The movie is full of ridiculous and iconic jokes and sequences, like the Spaceballs ship going to “Ludicrous Speed”, Dark Helmet using the VHS of Spaceballs to find Lone Starr and his crew, and Mel Brooks’ dual role of the weaselly President Skroob and Yogurt, the wise sage who trains Lone Starr in the power of “The Schwartz”.  The entire movie is below to watch thanks to YouTube.