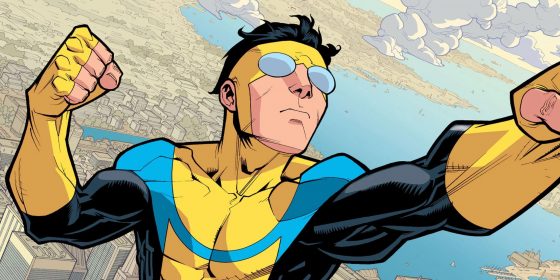 Seemingly fitting in perfectly alongside The Boys on Prime Video, the animated version of Robert Kirkman’s excellent comic Invincible is arriving in March on the streaming platform.  Starring Steven Yuen as Mark Grayson, the series follows 17-year-old Mark as he tries to survive the normal high school issues of teens while also trying to train and live up to his superhero father, the beloved Omniman (JK Simmons), who is basically Superman.  Mark eventually creates his own superhero persona, Invincible, and meets a team of heroes to join with but he eventually learns a secret about his father that will change his life, and possibly the fate of the entire world, forever.  Sandra Oh, Zazie Beetz, Gillian Jacobs, Zachary Quinto, Jason Mantzoukas, Melise, Mark Hamill, Mahershala Ali, Seth Rogen, and more co-star in the series and it looks fantastic and faithful to the original comic.  The first three episodes of the show drop on Prime Video on March 26th and then new episodes will release every week after that.  Check out the trailer below.