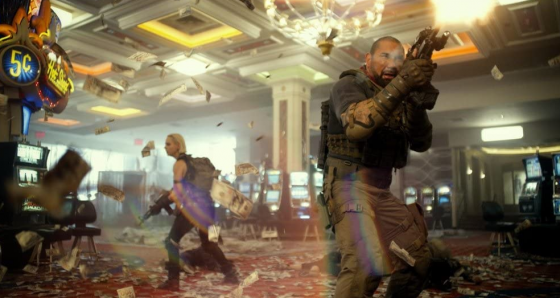 Along with returning to Justice League for his upcoming epic 4-hour cut of that movie on HBO Max, Zack Snyder is also returning to the genre that put him on the map with the zombie heist movie Army of the Dead, hitting Netflix in May.  After a zombie outbreak shuts down Las Vegas, a group of mercenaries break the quarantine and attempt to pull off a massive heist.  Dave Bautista stars alongside Ella Purnell, Ana De La Reguera, Garret Dillahunt, Raul Castillo, Tig Notaro, Omari Hardwick, Matthias Schweighöfer, Nora Arnezeder, Hiroyuki Sanada and Michael Cassidy.  Snyder previously put his spin on the Romero end of the zombie spectrum with his Dawn of the Dead remake but Army of the Dead definitely seems like it has more of a World War Z vibe with its massive hordes of zombies along with possibly some Zombieland style humor, especially in what looks like the initial outbreak in Las Vegas with the various tourists and wacky residents of the strip turning into undead monsters.  The movie is out on May 21st and you can check out the teaser below.

Review: Army of the Dead