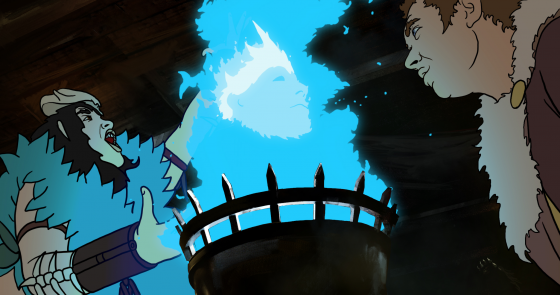 Debuting next week at the digital SXSW festival, The Spine of Night is a throwback to Ralph Bakshi movies like The Lord of the Rings and adult animation classics like Heavy Metal.  Set in a fantasy world under the thrall of an evil man who long ago gained powerful and forbidden knowledge from a special plant.  His power grows and he unleashes ages of darkness across the land.  A group of disparate heroes rises up to stand against him, including a tomb robber, a pair of star-crossed lovers, a crazed necromancer, a group of winged assassins, and an undead guardian.  The animation was all hand rotoscoped and it’s ultraviolent and mature like its inspirations.  Richard E. Grant, Lucy Lawless, Joe Manganiello, Patton Oswalt, Betty Gabriel, Abby Savage, Larry Fessenden, and Rob McClure lend their voices to the movie and it’s directed by Philip Gelatt and Morgan Galen King.  There doesn’t seem to be a release date beyond SXSW but hopefully, after its premiere, we’ll get more word on future releases.  Check out the trailer below.

Review: The Spine of Night