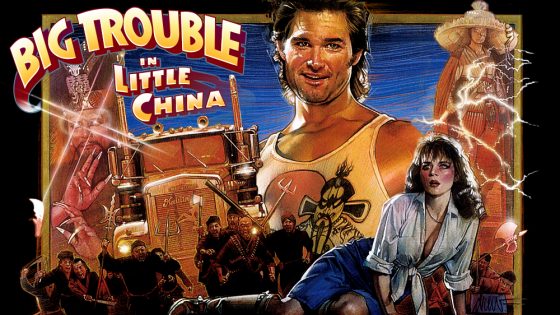 A commercial flop when it was first released in 1986, Big Trouble in Little China is now considered a beloved cult classic and one of the greatest collaborations between John Carpenter and Kurt Russell.  Big Trouble was actually rushed into production so that it could beat The Golden Child to theaters, as they shared a somewhat similar premise.  The Golden Child was the bigger commercial success at the time but Big Trouble in Little China is the one that has endured to the present day, getting comic-book sequels, board games, action figures, and more.  Kurt Russell, at the height of his powers, plays truck driver Jack Burton who teams up with his best friend Wang Chi (Dennis Dun) and sorcerer Egg Shen (Victor Wong) to stop the evil sorcerer/businessman David Lo Pan (James Hong), who has kidnapped Wang’s fiancee Miao Yin (Suzee Pai) and reporter Gracie Law (Kim Cattrall).  Both of the women have green eyes and if Lo Pan can marry a girl with green eyes and then sacrifice her in an elaborate ceremony, he can regain his corporeal form and continue his ancient goal of conquering the world.  The movie is full of martial arts, over-the-top villains, crazy creatures, and super memorable wisecracks and quotes and is an absolute blast from start to finish.  You can watch (or rewatch) the movie below thanks to YouTube.