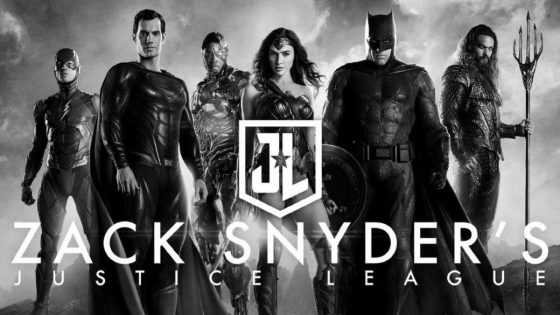 After years of internet campaigning and speculation, Zack Snyder’s Justice League is now real and available to watch on HBO Max.  Was it worth the wait and the 4-hour commitment?

If you remember the plot of the theatrical version, the very basic structure of the Snyder Cut is the same; following Superman’s death in Batman v Superman, the alien warrior Steppenwolf (Ciaran Hinds) arrives on Earth on a mission to find and unit the Mother Boxes, highly advanced alien technology that can terraform a planet into a copy of Apokolips, home of the ruthless alien warlord Darkseid.  Batman (Ben Affleck) and Wonder Woman (Gal Gadot) must find and unit the other metahumans from Lex Luthor’s files (Flash, Aquaman, Cyborg) to create an alliance of heroes to stand up to this threat and save the planet.  The biggest and best improvement of the Snyder Cut is just elaborating and explaining things in a much clearer and coherent manner.  Steppenwolf, the most generic of generic comic book movie villains in the original cut, is now given a fully fleshed-out backstory where he’s being forced to make amends for a past transgression against Darkseid and is desperate to appease his master and be allowed to return home to Apokolips and Darkseid actually appears in this version instead of vaguely alluded to and he looks fantastic and it’s sad we’ll never see the movie where he actually faced off against the Justice League.

There are also characters like Desaad and the Anti-Life Formula that help add more mythology to the villains and make fans of the comics happy.  The heroes also get more expansion than in the theatrical version and most everything is a massive improvement.  The Flash (Ezra Miller) no longer has the baffling and annoying fear of everything that he had in the theatrical version and we get to see more of his life before Batman recruits him, including a scene where saves Iris West (Kiersey Clemons) from a car accident.  There’s also more Aquaman, including scenes that more directly lead to the plot of his solo movie, and Batman and Wonder Woman is a more united front (I can’t fully recall but I think there was a weird, shoehorned in conflict between Bruce and Diana in the theatrical cut).

The character who truly benefits from the Snyder Cut though is Cyborg (Ray Fisher).  Cyborg in the theatrical version was almost nothing more than a walking McGuffin but he has a full, dramatic character arc that is full of beautiful imagery and real pathos and emotion.  He goes from bitter and resentful about his condition to acceptance of his power and forgives his father for the decision he made to save Victor’s life. There’s also Henry Cavill’s Superman, who thankfully no longer has the bizarre CG face of the original cut and gains his comic book black suit while staying a bit more true to the more stoic and serious version Snyder established in the two previous films he directed.  Overall the movie is definitely more serious and mature, as most of the Whedon material added to the theatrical version was goofy jokes to make it feel more like the MCU.  The movie still has some fun lines and moments of levity but the tone is much more grand and epic and treats the material with a gravity that you will probably either appreciate or not. The movie also adds in other characters who didn’t appear at all before, like Ryan Choi (Zheng Kai) aka a version of The Atom, and Martian Manhunter (Harry Lennix).  The latter is a cool easter egg for comic fans but J’onn doesn’t really do anything except give Lois (Amy Adams) a weird pep talk in the guise of Martha Kent (Diane Lane) (at least he doesn’t call her the “thirstiest reporter he’s ever known” though).

The Snyder Cut also features much more extended action sequences and has tons of Snyder’s trademark slo-mo style.  Steppenwolf’s attacks on Themyscira and the Atlantean outpost are much more extensive here and scenes like the Justice League’s first battle against Steppenwolf under Gotham City are also more extended and just look way better than the theatrical version.  The finale is also drastically changed, mostly for the better, as it loses the bizarre reddish hue of the theatrical version and gives characters like Flash and Cyborg better things to do, including the first hint of Flash’s time travel abilities.  The much talked about “Knightmare” sequence, which expands on the dream that Bruce has in Batman v Superman of a world conquered by Darkseid and Superman, is interesting and it’s cool to see characters like Deathstroke in more scenes but it’s mostly just a kind of weird spotlight for Jared Leto’s Joker, losing his Juggalo/rapper appearance from Suicide Squad and it’s all just set up for a sequel that will most likely never happen, so it’s definitely one of the more superfluous scenes in the movie.

One slightly controversial decision is that the movie is in a 4:3 ratio, so it looks square on most widescreen TVs but you get used to it fairly quickly and don’t really notice the bars on the side.  It would have been nice to have it be widescreen or fully IMAX but just the fact that this came out at all is a miracle.  The movie’s runtime was also frightening for a lot of people but the chapters the movie is divided into definitely give you some easy places to take a break if you need it and it honestly didn’t feel that long while I was watching it.  I’ve seen movies that are only 90 minutes that feel like they were longer than watching this version of Justice League and there’s enough action or plot/character development happening in each scene to keep things moving and interesting.

Overall, Zack Snyder’s Justice League is worth the experience just to say that you saw it and to be able to join in the conversations that are sure to occur over the next few days and weeks to come.  Beyond that though, this is a vastly superior version of the theatrical version of Justice League that fixes almost all the plot and character flaws while adding in more interesting mythology building and more exciting and fantastic action.  It is a significant investment but if you enjoyed what Zack Snyder brought to Man of Steel and Batman v Superman, this is a must-watch that expands and builds on what he set up in those films regarding the world of DC but it definitely won’t convert people who weren’t already inclined to like what he brought before in movies like Man of Steel and Batman v Superman.