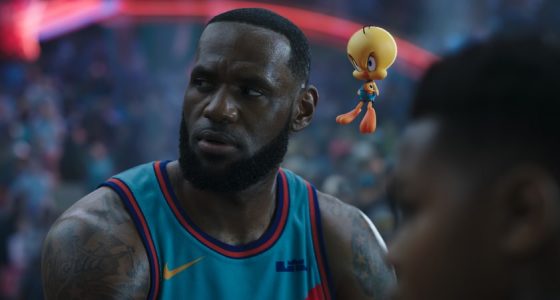 If you’re around our age, you’re probably a huge fan of the original Space Jam with Michael Jordan at the height of his powers, a slamming soundtrack, the fearsome Monstars, and all your favorite Looney Tunes characters.  Now 25 years later, the Tunes find themselves having to ball again with Lebron James in Space Jam: A New Legacy.  Lebron plays a version of himself, who gets abducted along with his son Dom (Cedric Joe) by a rogue AI named Al G. Rhythm (Don Cheadle), who forces Lebron to participate in a new (Cyber)Space Jam against his AI Goon Squad in order to escape back to the real world with his son.  Lebron teams with Bugs, Daffy, Lola, Tweety, Yosemite Sam, and the rest of the Tune Squad, first in Tune World where Lebron gets transformed into a hand-drawn 2D cartoon version of himself before the team faces the Goon Squad in Al G’s arena, where almost every character in the history of Warner Bros is in attendance for the game, including characters from DC, Game of Thrones, Hanna-Barbera and more.  That aspect definitely gives this new Space Jam a Ready Player One vibe and the Tunes also get a new look for the final game as they transform into 3D CG versions of themselves.  The original is a high bar for a lot of 90s kids that this new one will have a tough time topping but hopefully, it will at least be fun in its own right.  The movie is out in theaters and on HBO Max on July 16th and you can check out the trailer below.