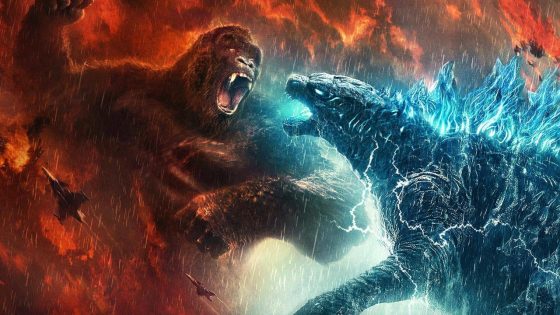 The fourth entry in Warner Bros’ Monsterverse, two of the biggest monsters in movie history finally face off again for the first time in decades with Godzilla vs Kong.

Picking up three years after Godzilla: King of the Monsters, none of the Titans, including Godzilla, have been seen or gone on a rampage.  Monarch is still monitoring and studying them, including Dr. Ilene Andrews (Rebecca Hall), who has been studying Kong on Skull Island for a decade.  Hollow Earth expert Nathan Lind (Alexander Skarsgard) is approached by the CEO of Apex Cybernetics, Walter Simmons (Demian Bichir), to lead an expedition into the Hollow Earth and find a power source that they claim could level the playing field for humanity against Titans.  Believing a Titan could lead them to the power source in the Hollow Earth, Nathan convinces Ilene to let them bring Kong off Skull Island to an opening in Antarctica that leads into the Hollow Earth but Godzilla, who has now returned and is attacking Apex facilities around the world, attacks Kong while en route, as both of them are Alpha Titans and only one can remain to be the dominant Titan on the planet.  The plot is completely ridiculous but in a much more fun way than the cliche “humanity is a disease” plot of King of the Monsters.  It leans completely into its over-the-top mythology about the giant monsters, including a war between Kongs and Godzillas in the ancient past and the entire Hollow Earth locale, which is apparently where all the monsters originally came from.  The human plots are still not great but they are serviceable enough to get to the next big monster fight and if you were looking for more Monarch backstory and development, they are basically a non-factor in this movie with King of the Monsters’ Kyle Chandler now their director but they do basically nothing to help in the battles or provide any information.  Along with the Hollow Earth expedition, Millie Bobby Brown returns from King of the Monsters as Madison Russell, who has become a conspiracy theory junkie who teams with her friend Josh (Julian Dennison) and a Titan conspiracy podcaster, Bernie (Brian Tyree Henry), to infiltrate Apex and figure out caused Godzilla to return and go nuts.  If you’ve seen any of the fan theories (or toys and other products) then you know what Apex is ultimately up to.  That trio’s sneaking around Apex isn’t very interesting but the end result is an awesome and cool reveal that leads into the phenomenal final battle in Hong Kong.  The Hong Kong sequence from start to finish is incredible and arguably the best battle in the Monsterverse to this point.  Kong and Godzilla but get the momentum in the vein of a classic wrestling match and then a new threat arrives that throws the battle in an entirely different direction.  Director Adam Wingard also bathes the battle in neon from the skyscrapers of Hong Kong and it is visually stunning and viscerally exciting.  The other battles are fantastic as well and it seems like they learned their lesson from King of the Monsters and its endless rain and night battles that made things incredibly muddy and hard to follow.  The first big clash between Godzilla and Kong is in the day as the monsters battle on top of ships in the Hollow Earth expedition convoy and under the water, where the big G has a distinct advantage.

As mentioned above, none of the humans in the movie are particularly interesting or memorable.  Demien Bichird has some moments as a sleazy, evil CEO but the best is probably young Kaylee Hottle as Gia, a deaf girl from the native people on Skull Island adopted by Dr. Andrews who forms a strong bond with Kong and can communicate with him via sign language.  Kong is easily the best character in the movie and the movie does an excellent job of making you sympathize and root for him as he’s the most expressive and intelligent that he’s been in the Monsterverse and feels closer to Caesar and the apes from the excellent Planet of the Apes trilogy.  Godzilla is also great but more firmly in the bullying villain role this time instead of humanity’s savior like in King of the Monsters.  They both have personality and you can them intimidating and strategizing, which makes their fights incredibly exciting and interesting.  The movie definitely lives up to its title and delivers the battles between two of the most famous monsters in movie history that you would want.

Godzilla vs Kong will definitely give you your money’s worth if you are looking for awesome monster battles and it’s a huge improvement over the misstep that was King of the Monsters.  I think Kong: Skull Island might be my favorite Monsterverse movie but this is probably a close second with Godzilla 2014 not far behind and King of the Monsters a distant last place.  The Kong vs Godzilla fights are excellent and the new threat that arrives at the end is also interesting and cool as well.  If you haven’t watched it yet and you’re a giant monster fan, get to a theater or turn on HBO Max as soon as possible.