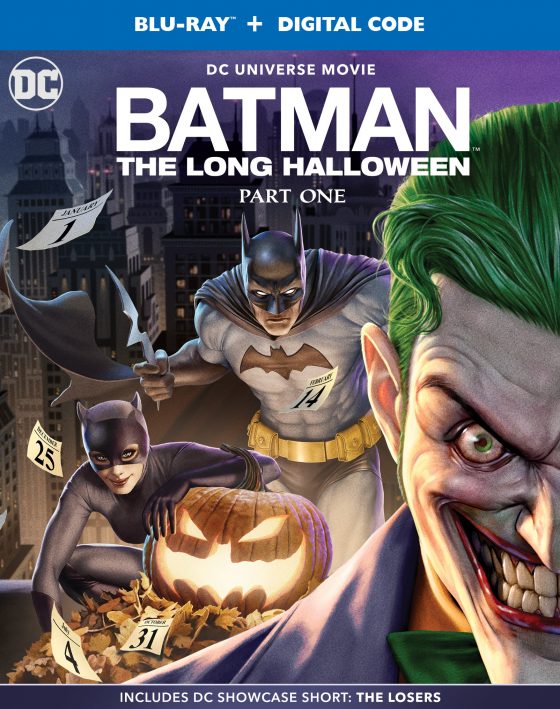 Jeph Loeb and Tim Sale’s classic Batman story The Long Halloween is getting the animated treatment, with Part One of the story arriving this summer.  Starring Supernatural’s Jensen Ackles as Batman, the Dark Knight teams with Harvey Dent (Josh Duhamel) and Jim Gordon (Billy Burke) to take down The Roman, Carmine Falcone (Titus Welliver) after they uncover a brutal murder on Halloween.  The trio’s quest for justice gets thrown for a loop when they realize there is a serial killer calling themselves Holiday that kills someone on every subsequent major holiday.  There’s also the ever-present threat of The Joker (Troy Baker) looming as well.  Catwoman (Naya Rivera) is also around to complicate things for Batman.  The movie has the new house style for the DC Universe animated movies that feels a bit retro and sort of in the vein of a Darwyn Cooke, which is a bit disappointing considering the distinctive style of Tim Sale but it at least seems better than The Killing Joke adaptation.  Like fellow adaptation The Dark Knight Returns, this epic Batman tale is being spread across two movies, with Part Two releasing later on.  The Long Halloween also includes a new DC Showcase Short featuring the World War II-era DC team, The Losers.  Batman: The Long Halloween Part One is out on Digital and Blu-Ray on June 22nd, check out the trailer below.