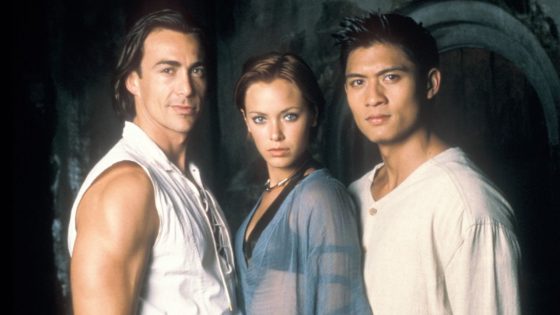 As the latest iteration of Mortal Kombat arrives this weekend in theaters and on HBO Max, you can check out one of the more forgotten adaptations of the iconic game series with Mortal Kombat: Conquest.  Hitting in the late 90s in syndication and later becoming a TNT series to close out its one and only season, Conquest was a prequel to the franchise, taking place before the first game and following the original Kung Lao, played by Paolo Montalban, shortly after he defeated Shang Tsung in one of the earlier Mortal Kombat tournaments.  Kung Lao looks to train a new generation of fighters for the upcoming tournaments, including a bodyguard named Siro (Daniel Bernhardt) and a thief named Taja (Kristanna Loken) and they are guided by Lord Raiden (Jeffrey Meek) as they train and defend Earthrealm from various threats.  Given the prequel nature of the show, a lot of the game characters don’t exist yet, at least on the Earthrealm side of things, but Scorpion, Sub-Zero, Quan Chi, Shao Khan, Shang Tsung, Kitana, Mileena, Noob Saibot, Reiko, Reptile and Rain did appear at some point in the series.  Chris Casamassa, who played Scorpion, who played Scorpion in the original Mortal Kombat movie reprised his role on Conquest and JJ Perry, who played Sub-Zero on Conquest, was Scorpion, Cyrax, and Noob Saibot in Mortal Kombat: Annihilation.  The show also had some notable recurring roles with the likes of Eva Mendes, Jaime Pressly, Angelica Bridges, Fabiana Udenio, Kathleen Kinmont, and WCW wrestlers Meng and Wrath, as Conquest followed WCW Monday Nitro when it came to TNT.  You can check out the first episode of the series below.