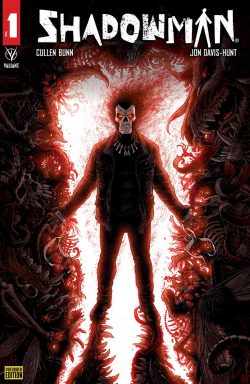 The Deadside is a realm that holds back spirits from disturbing the world of the living. But every so often, someone can be sent to the Deadside. Or worst, something can be bought back. Watching over the living is Jack Boniface, a part-time musician, and full-time voodoo guardian, with the ability to become the Shadowman. Shadowman fights back evil spirits and those that call on black magic to spread evil.

When wicked creatures from the Deadside are violently attacking, Jack Boniface notices strangely about these creatures’ arrival. It doesn’t take long before Baron Samedi grabs Boniface’s attention to the source of this occurrence. Boniface has no other choice but to follow the mischievous loa spirit and follows him to a gathering at a mysterious estate.

Reading like a supernatural noir, this newest installment to the Shadowman series starts off with highflying action and grisly visuals. Shadowman doesn’t fight creatures from the Deadside with kids’ gloves. His goal is to protect humans and will make sure he gets the job done. However, Jack Boniface doesn’t wander without reason. He considers his situation well before acting. Unfortunately, he has to work with Baron Samedi, a spirit that is known for his trickery. Now Boniface must work with Baron Samedi, without losing his own soul to the devil.

This issue gives a great introduction to Shadowman for new and old readers. It is a fun drop-in point that showcases some of the development of Jack Boniface and his shadow ability. The suspenseful plot and gruesome artwork make this a fun read for any supernatural horror fan.