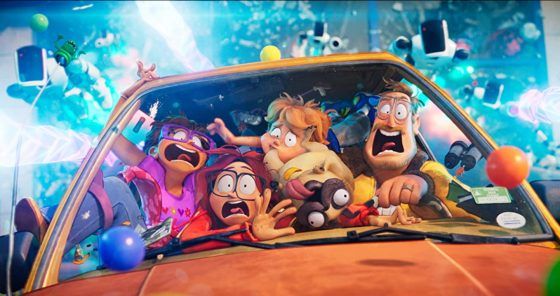 The latest film from Sony Animation and producers Chris Miller and Phil Lord, The Mitchells vs The Machines is a hilarious and heartwarming adventure that continues Sony Animation’s evolution and innovation in the world of animation.

Abbi Jacobsen voices Kate Mitchell, who is finally going to achieve her dream as she heads to California to attend film school.  Her relationship with her dad Rick (Danny McBride) has been on the rocks for a while and, in an attempt to make things better, he declares that he’s canceled Kate’s plane ticket and, instead, the whole family is going to road trip across the country to bring Kate to college.  While things seem to start getting slightly better, the world is attacked by robots created by tech billionaire Mark Bowman (Eric Andre) as a replacement to his PAL phone AI.  PAL (Olivia Colman) takes over the new robots and captures all of humanity, except the Mitchells, and is loading them on rockets to launch into space.  The Mitchells are humanity’s last hope to stop PAL and get things back to normal.  The plot is fantastic and moves at a fun and fast pace.  There’s a brilliant blend of hilarious comedy, over-the-top action, and genuinely sweet moments, which isn’t a surprise considering most of the team behind the scenes worked on stuff like Gravity Falls and Disenchantment.  There’s a bunch of great set pieces throughout, like The Mitchells having to battle various appliances in a mall and the massive final battle with an army of killer robots.  The animation is stunning and pushes the already great work that Sony Animation has done with stuff like Into the Spider-Verse.  The Mitchells vs The Machines seems like it has the style as Spider-Verse but without the intentional dropped animation frames, so it’s much smoother and it also subs out Spider-Verse’s comic book enhancements for memes and stuff you would see on Instagram or Snapchat, which reflects the aesthetic of the movie’s Kate is always making. The characters are also extremely well-realized and can go from bug-eyed fear to legitimate drama depending on what the scene requires.

The voice cast is just as excellent as the animation and really makes you love this group of oddballs.  Abbi Jacobsen doesn’t sound much different than Bean on Disenchantment but she is a much sweeter and smarter character and you really get to know her personality, especially from all the glimpses into her ridiculous movies.  Director Mike Rianda voices younger brother Aaron Mitchell and does a great job playing up his obsession with dinosaurs, his love for the family dog Monchi and his freakouts around girls.  Danny McBride definitely plays against type as Rick Mitchel who is more likable and loving than the normal cocky assholes McBride brilliantly portrays in stuff like Eastbound and Down or Vice Principals and he and Jacobsen sell the hell out of the movie’s emotional beats.  Maya Rudolph rounds out the Mitchell as mom Linda Mitchell and she’s solid but it seems like she won’t have much to do until a fantastic and hilarious moment in the big finale that takes her to another level.  Fred Armisen and Beck Bennett are also great as Eric and Deborahbot, two of the PALMax robots that malfunction and become allies of the Mitchells.  They have some hilarious back and forth and ridiculous attempts to either pretend to be human or relate to humans.  Olivia Colman plays a great and hilarious villain in PAL, who is dripping with condescension and sarcasm for her creator and humanity in general.

The Mitchells vs The Machines is a brilliant and funny movie with gorgeous and stunning animation that is a must watch on Netflix,  If you’re a fan of stuff like Lord and Miller’s previous movies, Gravity Falls or Disenchantment, you’ll most likely love The Mitchells vs The Machines and it’s another amazing entry from Sony Animation as they continue to push the medium forward.