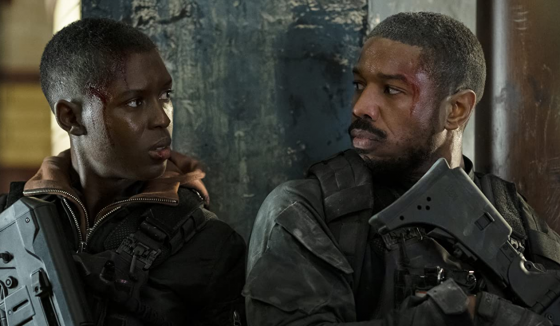 Jack Ryan gets most of the mainstream attention as far as Tom Clancy adaptations but Navy SEAL John Kelly aka John Clark gets a starring vehicle with Without Remorse, which hit Prime Video this past weekend.

Michael B. Jordan stars as John Kelly, who is on a mission to Syria where he and his squad of SEALs, along with shady CIA agents, encounter not local Syrian militia but Russian soldiers.  Upon returning to the states, John and his team are targetted by Russian assets, with John critically wounded and his pregnant wife killed.  Going rogue, John attacks a Russian official outside Dulles and gets the name of the one attacker who escaped but is sent to prison.  Released to provide his intel, he joins a black ops mission to Russia to recover the attacker, but he’s plotting revenge.  The plot is pretty standard and doesn’t have as much meat on its bones as you might expect from something based on a Clancy novel and also something written by Taylor Sheridan, who has brought more complicated thrillers to screens with stuff like Sicario and Hell or High Water.  Without Remorse sort of feels like an extended pilot for a TV series or a really long setup to the property that we all actually want to see and is teased at the end of this movie (*cough* Rainbow Six *cough*).  The twists are pretty bland and predictable and the Clancyness of Russia, the CIA, and military conspiracies doesn’t add much to a bare-bones revenge story.  The one thing the movie does do pretty well is action and unique spins on the action.  It was in the trailer but there’s a truly badass action beat where John crashes into the car of a Russian official, sets the car on fire, and then instead of just letting him burn as you might expect from a revenge thriller, he gets into the car to interrogate him.  There’s also a brief but memorable sequence where John readies himself to fight prison guards and clogs up the sink in his cell to start flooding the room and make the guards have less footing.  The big action beat of the movie is most of the second act, with an extended sequence where John and his team are trapped in a building in Russia with snipers pinning them down and Russian soldiers closing in.  There might actually be less action than you might expect but what’s there is pretty solid and, in a lot of cases, unique.

Michael B. Jordan gives a fantastic, intense performance as John Clark and without him, the movie would definitely be much more rote and bland.  Jodie Turner-Smith is also great and if you saw her on The Last Ship, you know she can handle this type of action.  Guy Pearce and Jamie Bell both give solid performances, with Bell being extremely hatable as CIA agent Ritter for most of the movie and Pearce is equal parts friendly and slimy as Secretary Clay.  The one weird casting note is Brett Gelman as Viktor Rykov, the target of the black ops mission to Russia.  Gelman has always been comedic relief in all of the shows and movies he’s been in and it’s just kind of weird to have him be a supposedly ruthless Russian asset and his big monologue to John just sounds strange and somewhat laughable coming from him.

Overall, Without Remorse is solid but nothing special.  It’s a solid action thriller with a great, intense performance from Michael B. Jordan but it won’t do a lot you haven’t seen before, at least plot-wise.  There is definitely a lot of fun and unique action beats though throughout.  If it gets to follow up on what it sets up at the end, I’d definitely be interested and hopefully, that movie would be a little more original and interesting plotwise.