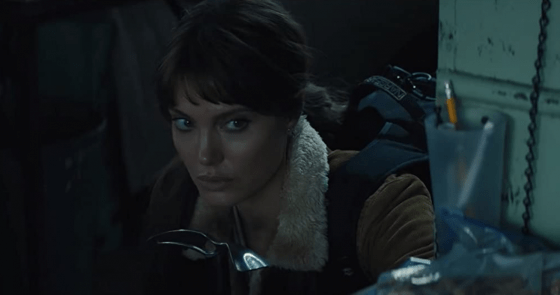 It’s hard to believe but it’s been over a decade since we saw Angelina Jolie really in action hero mode, with 2010’s Salt being the last big action blockbuster from the superstar.  She’s finally back in action mode for Those Who Wish Me Dead, which is the latest hybrid released in theaters and on HBO Max.

Jolie plays Hannah Faber, a smokejumper and firefighter who is exiled to a fire tower after she was deemed responsible for the deaths of three young boys in a forest fire a year earlier.  Hannah finds teen Connor Casserly running for his life in the forest while she’s on patrol and becomes involved in a cat and mouse chase, as assassins have killed Connor’s father and are now after him because of financial knowledge his father had that a mysterious client is paying to get rid of.  Hannah’s ex and Connor’s uncle Ethan (Jon Bernthal) and his pregnant wife Allison (Medina Senghore) also become involved.  The plot and characters feel right out of the 90s, but mostly in a fun throwback kind of way.  You could easily imagine this playing in theaters alongside stuff like Hard Rain.  There’s a simplicity and efficiency to the plot that is very welcome and it also doesn’t really overstay its welcome either, coming in around 90 minutes without credits.  If there’s one complaint about the plot though, it’s that it takes a while for Jolie and the two villains, played by Nicholas Hoult and Aiden Gillan, to even be in the same area and there’s never really any back and forth between them.  I was hoping from the trailers that we would get more play between Jolie and the assassins and her using her survival skills to outwit and eventually take them down.  There’s not really any of that, which feels like a missed opportunity for Jolie to get her Rambo on and make some improvised traps or lure the villains into dangerous areas that only she knows.  As it is, Bernthal and Senghore have as much, if not more, interaction with the villains, and Senghore especially gets to be surprisingly much more badass than Jolie, especially with her character being six months pregnant.  There’s also not a lot done with the encroaching forest fire except for in the finale as, again, the trailer made it seem like that would be a much bigger factor and maybe involve more of the firefighting know-how from Hannah to get out of it.  There is some solid tension and decent action throughout, so it’s not like the movie is terrible at all, but there definitely seems like there were some opportunities that they didn’t take advantage of.

Jolie is solid as Hannah and has a great mix of struggling with her past grief and overcompensating cockiness, especially in a goofy intro where she gets drunk and does a stunt involving a parachute.  Jon Bernthal is great as always and gets to be a bit softer than we’ve seen him recently in things like The Punisher but still gets to be a bad-ass as needed.  As mentioned above, Medina Senghore basically steals the movie as Allison and gets some of the most badass moments of the whole movie and it’s a nice change of pace for her not to be used just as a motivator or tool to show how evil the villains are by killing her.  Hoult and Gillan are interesting villains and the movie does a great job with their implied history of working together where they have strategies and experience that we get through their actions and dialogue but is never explicitly spelled out.  Finn Little is solid as Connor and he and Jolie have a fun back and forth as they bond over their shared trauma of seeing people die in front of them but also have some fun banter.

Those Who Wish Me Dead is a solid thriller with some fun sequences and tense action but there are definitely some opportunities that it feels like were missed, mostly with the amount of interaction between Jolie and the villains and using more of the character’s supposed backstory and skills.  If you’re looking for an effective thriller that feels like a throwback to the 90s, it’s worth checking out Those Who Wish Me Dead either in theaters or on HBO Max.