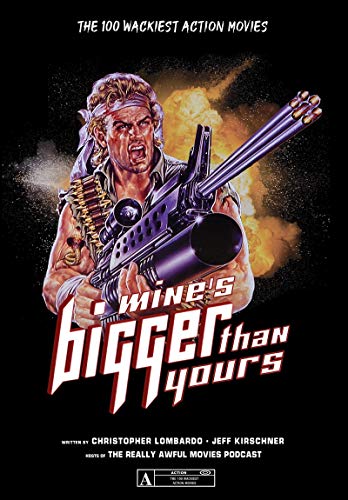 We’re always on the lookout for great action movie-related literature to add to the library at Everything Action and we got the chance to check out Mine’s Bigger Than Yours: The 100 Wackiest Action Movies by Christopher Lombardo and Jeff Kirschner, who also co-host The Really Awful Movies Podcast.

As the title suggests, Mine’s Bigger Than Yours features writeups about 100 of the craziest, over the top and ridiculous action movies ever made.  The book is divided into helpful sections highlighting subjects like martial arts, lethal ladies, one-man armies, and dystopian futures with a handful of movies in each section.  Each movie gets a rundown of the plot and especially stand out ridiculous moments from the movie.  The plot summaries and descriptions of the scenes and action sequences have a great, snarky tone that both makes fun of and celebrates the ridiculous nature of the movies featured and really makes you want to seek them out and add them to your watchlist.  There’s a wide range of movies ranging from the obscure to well known but some are maybe a little too well known?  Movies like Hard to Kill and Above the Law, huge theatrical hits, are included alongside nonsense like Ninja Holocaust and Strike Command, and the more well-known, mainstream movies featured seem a little incongruous to the criteria the book sets out at the beginning.  There’s not really a lot of new information for movies like Commando that action fans wouldn’t already know and they’ve probably already seen entries like that multiple times.  Granted, movies like Hard to Kill and Above the Law are pretty ridiculous but Mine’s Bigger definitely shines more when it features obscure insanity like Alienator or Mr. No Legs and makes you want to seek out those more unknown gems. 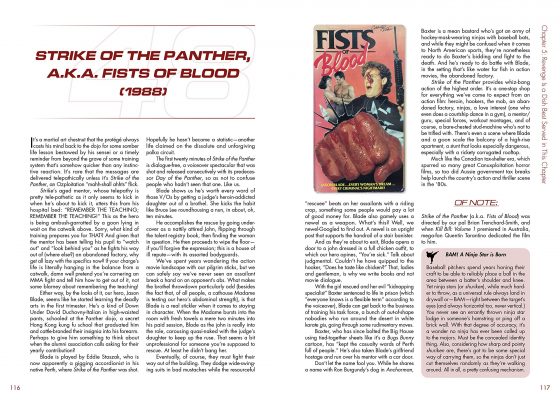 The book is laid out very well with great, full-color images for each entry, whether it be the poster, stills, or the VHS box and there’s trivia or some other background facts on a lot of the entries.  If you are looking for truly in-depth info on the making of each movie, like The Cannon Film Guide, you may be slightly disappointed here but that doesn’t seem to be the intention.  It seems like authors Chris and Jeff are just really excited about these crazy movies and wanted to get the awareness of them out there and, in that, they succeed.  There were many times after reading an entry that I jumped on Just Watch to see if they were available to stream anywhere (Pro Tip: A bunch of them are on Tubi). Mine’s Bigger Than Yours is a great starting point for learning about these obscure, crazy movies and getting you interested to learn more and seek them out.

Mine’s Bigger Than Yours is a great, fun, fast read that should please most action movie fans.  Even if you are a hardcore action fan, there are probably still movies in here that you’ve never heard of and will want to seek out after reading about them.  The write-ups are hilarious and informative and you can feel the excitement and love from the authors for all these ludicrous works of art.  Some of the entries feel a bit too mainstream, like Commando, Road House, and Hard to Kill, and there’s not really a lot of new information on those classics but the book definitely shines in highlighting the deeper and truly wacky deep cuts and you’ll definitely be making plans for a binge-watching marathon after reading.  It’s available on Amazon and www.reallyawfulmovies.com and it’s definitely worth checking out for any action movie fan.