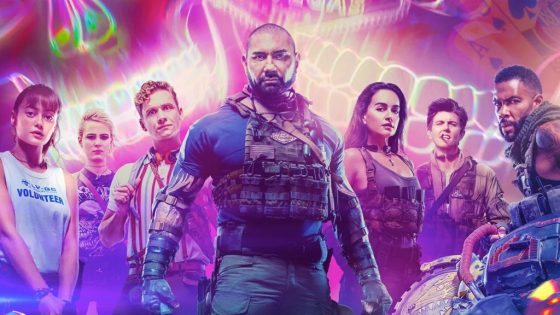 Zack Snyder delivered his superior version of Justice League earlier this year on HBO Max and now he’s shifted over to Netflix for a big return to the zombie genre with Army of the Dead.

Army of the Dead is set in a world where a zombie outbreak infected Las Vegas, which eventually resulted in the city being walled off and the zombie left to overrun the city.  Dave Bautista plays Scott Ward, who leads a team into Vegas and attempted to rescue survivors during the “zombie war” but now flips burgers at a diner in the middle of nowhere and is estranged from his daughter Kate (Ella Purnell).  Scott is approached by Tanaka (Hiroyuki Sanada) to lead a team into Vegas and attempt to steal $200 million from the vault of his casino The Bly, of which Scott and his team will get $50 million, but they have to get out without getting killed by zombies or being incinerated by a nuclear bomb that is going to level the city in a few days.  Scott recruits a team including his old partners Maria (Ana De La Reguera) and Vanderohe (Omari Hardwick), safecracker Ludwig (Matthias Schweighöfer), and helicopter pilot Peters (Tig Notaro) and others (including an adamant Kate) and they head into the city.  There’s some solid world-building and the ruined Las Vegas location is exceptionally well realized.  The movie explores an interesting angle with the zombies where there are more intelligent “Alphas” that lead the others and there are some crazy details later on but the movie definitely could have explored more of how this new zombie society operates.  In typical Zack Snyder fashion, the movie is just over 2 and half hours long, which is insane for a zombie movie, but it doesn’t really use that extended time to explore the zombies or stuff like the ulterior motives of Tanaka and his agent with the team, Martin (Garret Dillahunt).  If it’s not going to do anything interesting with the extended time, it really could have gotten chopped down a bit.  It’s also extremely nihilistic, even for a zombie movie and it has no qualms about quickly and suddenly killing characters.  The kills are pretty exceptional though and there is some fantastic action throughout and the zombies themselves, especially the Alphas, look great with some fantastic makeup effects and great gore effects and there are cool things you don’t usually see like zombie tigers and horses and zombies using weapons.  It also does a great job of showing the scope of the infection, especially during the great opening credits (a Snyder staple) which are basically a mini World War Z.

Dave Bautista carries the movie with his usual solid presence and manages to sell both the dramatic side and the badass side of his character.  He also does most of the heavy lifting in the relationship with Scott’s daughter Kate, because whether it’s the writing or the directing, Kate is an insufferable brat who endangers the team and constantly takes the moral and doesn’t seem worth the effort or the money Scott is willing to give her.  The rest of the cast is solid and they all kind of slot into Suicide Squad roles with their various quirks and specialties with Tig Notaro (who was never on-set but added digitally to replace the disgraced Chris D’Elia), Matthias Schweighöfer, and Garret Dillahunt being standouts.  There are some strange setups for characters that don’t pay off though, like Omari Hardwick very explicitly bring a gigantic saw but then never using it against zombies or Theo Rossi, an asshole refugee camp guard, seemingly being set up as a secondary villain but never getting a proper showdown with any of the characters.  As mentioned above, you shouldn’t really grow too attached to any of the characters though because the nihilistic style of the movie means anyone can, and probably will, get killed suddenly and quickly.

Army of the Dead is a solid hybrid of heist and zombie movies that is kind of bloated and doesn’t quite explore its interesting new twists on zombies as much as you might want.  It does make great use of the Las Vegas setting and has some fantastic zombie action sequences and gore and if you’re a fan of the genre and Bautista, it’s definitely worth checking out.