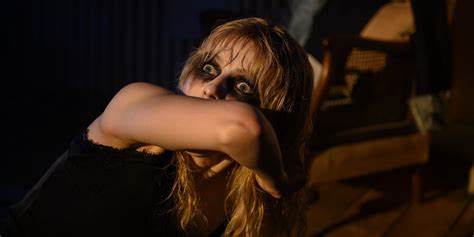 Edgar Wright is best known for his hilarious Cornetto Trilogy and the colorful and spectacular adaptation of Scott Pilgrim but he’s going full dark, psychological horror for his latest film, Last Night in Soho.  Thomasin McKenzie stars as Eloise, an aspiring fashion designer living in London.  Through some sort of mysterious circumstances, she’s able to travel back in time to the 1960s and inhabit the body of her idol, a singer named Sandy (Anya Taylor-Joy).  As Eloise keeps going back, it seems like the past starts to creep more and more into the present.  Jessie Mei Li, Matt Smith, Dianna Rigg, and Terrence Stamp co-star.  Like most of Wright’s movies, the visuals look absolutely stunning but it’s not clear if it will have any of his trademark quick cuts or if it will be more traditionally edited.  Given his past movies, it will definitely have some sort of awesome 60s soundtrack and is probably going to be a must-watch for most of us this coming October.  The movie is out on October 22nd and you can check out the trailer below.

The Sickness is Back For the Cabin Fever Remake (Trailer)