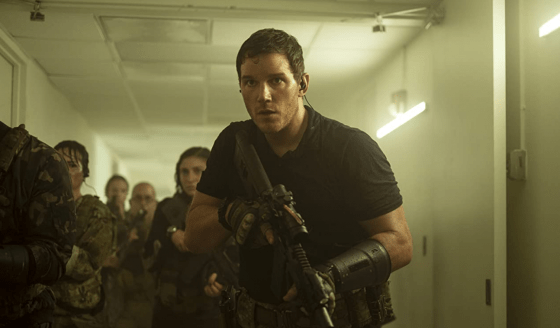 Originally supposed to hit theaters, Amazon purchased the rights to The Tomorrow War from Paramount and the movie will arrive as a Prime-exclusive just in time for the July 4th holiday weekend.  Chris Pratt stars as a former soldier and current teacher Dan Forester.  Dan and the rest of the world are shocked when time travelers from the future, 2051 to be precise, appear and deliver a chilling message; humanity is losing a war with an alien force and they need to draft soldiers from the present to bolster their ranks and try to fight back. It’s basically a reverse Terminator mixed with some Edge of Tomorrow.  JK Simmons, Yvonne Strahovski, Betty Gilpin, Sam Richardson, Edwin Hodge, Keith Powers, Theo Von, and Mary Lynn Rajskub co-star, and the movie is directed by Chris McKay, who is making his live-action debut after directing movies like The LEGO Batman Movie.  The movie hits Prime Video on July 2nd and you can check out the trailer below