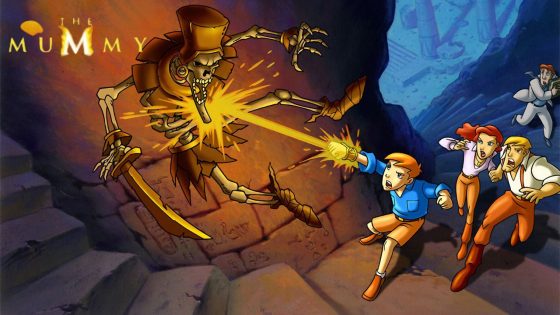 The Mummy Returns arrived in theaters in May of 2001 and later that year in September, Kids’ WB brought Imhotep and the O’Connells to the small screen with The Mummy: The Animated Series.  Loosely based on the first two movies, the series followed Rick, Evy, and Alex as they traveled the globe exploring ancient tombs and finding lost artifacts.  Alex somehow gets himself into almost the same situation he did in The Mummy Returns when he gets an ancient bracelet, this time the Manacle of Osiris, stuck to his wrist.  Unlike the Bracelet of Anubis, the Manacle of Osiris gives Alex special abilities, which he uses to help his parents fight off Imhotep and other villains who want the power for themselves.  John Schneider, best known for the Dukes of Hazzard, voiced Rick while Chris Marquette voiced Alex, Grey Delisle voiced Evy, and Jim Cummings voicing Imhotep.  Other characters from the franchise, like Jonathan, Ardeth Bay, and Anck-Su-Namun appeared as well along with a bunch of new characters created just for the series.  The show lasted two seasons and 26 episodes total and the entire series was released on DVD in 2008.  Currently, you can watch the entire series on Peacock but the first episode is also on Youtube, which you can watch below.