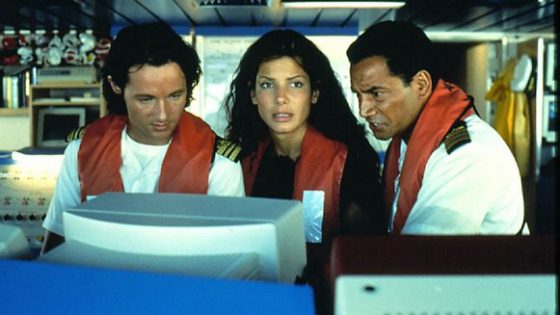 Originally performed by Elvis for the Blue Hawaii soundtrack, “Can’t Help Falling in Love” became one of the King’s most popular and beloved songs.  Surprisingly almost as big is the cover by UK reggae band UB40, who performed a cover of “Can’t Help Falling in Love” for the soundtrack of Speed 2: Cruise Control in 1997 which was one of the biggest hits of that year.  Returning director Jan De Bont wanted to fill the movie’s soundtrack with reggae and Caribbean-inspired music to match the cruise ship locale and the eventual finale in Saint Martin.  UB40 actually has a cameo in the film and other artists like Shaggy and Maxi Priest appeared on the soundtrack as well.  UB40’s version of the song was a pretty massive hit when it was released, hitting #1 in multiple countries, including the US and their native UK, and ended the year at #3 on the Billboard charts and was #22 on the 90s decade chart.  Outside of Speed 2, “Can’t Help Falling in Love” also appeared in the movie Sliver, in the trailer for Fools Rush In, and on the TV show Hindsight.  Check out the video for the song below, which unfortunately isn’t set on a cruise ship and doesn’t feature any of the cast from the movie.