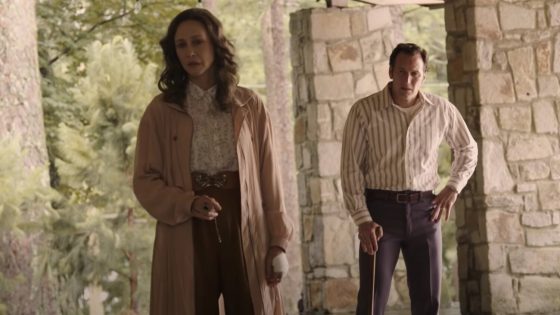 The Conjuring: The Devil Made Me Do It is the eighth film in The Conjuring Universe franchise but only the third proper entry focusing on Ed and Lorraine Warren and while it’s a solid enough entry in the series, it doesn’t reach the heights of previous movies.

Ed and Lorraine Warren (played wonderfully as always by Patrick Wilson and Vera Farmiga) are called to the possession of young David Glatzel (Julian Hilliard) in Brookfield, CT in 1981.  After a brutal exorcism that puts Ed in the hospital, it seems like David is saved but his sister’s boyfriend Arne Johnson (Ruairi O’Connor) took the demon into himself and later commits a horrific murder.  Debbie Glatzel (Sarah Catherine Hook), Arne’s girlfriend and David’s sister, asks the Warrens to help Arne and they convince Arne’s defense lawyer to enter a plea of Non-Guilty because he was possessed by a demon and not in control of his actions.  Ed and Lorraine then set out to prove their unprecedented claim, which puts them onto a similar case in a nearby town and in the crosshairs of a dangerous adversary skilled in black magic.  The Devil Made Me Do It is thankfully more straightforward than The Conjuring 2 was, which kind of felt like it suffered from a bit of the same issues as Iron Man 2 did, where the plot kind of got derailed to set up other entries in the franchise.  The switch to more of a mystery/thriller plot is interesting but it also seems to have taken away a bit of the scare and suspense sequences of the previous entries.  The Devil Made Me Do It isn’t really that scary and there’s not really any of the long, excruciating suspense that the series became known for, especially in the first movie, and there also aren’t a lot of them over the top set pieces from say, The Conjuring 2.  The opening exorcism is about as crazy as things get with the special effects as young David floats in the air, contorts, and threatens everyone while the wind howls everywhere. The creature design also feels a bit lacking compared to previous movies.  There’s nothing as creative or creepy as, say The Crooked Man, The Ferry Man from Annabelle Comes Home, or even Annabelle herself.  The movie goes to sort of generic demonic imagery with whited-out eyes on those possessed and their big new creature is just a large, naked corpse that the Warrens first encounter at a morgue.  There does seem to be a lot more focus on Lorraine’s psychic powers in this movie and there is some cool visual stuff with how it transitions from the current location to Lorraine’s vision of the past and it ties into the human villain, who is almost like an anti-Lorraine.  The villain seems like it could be a pretty big game-changer for the universe and a cool idea after all the supernatural entities of the franchise but you don’t get a lot of backstory or motivation about them except for a few quick exposition dumps, although most of those come from the wonderful John Noble, so that balances things out a bit.

Patrick Wilson and Vera Farmiga are as great as ever and continue to have lovely chemistry.  They just exude goodness and calm which is one of the great touches of the series where you have this loving 50s sitcomesque couple fighting demons and being experts on the dark arts.  Wilson and Farmiga carry the movie and even if things may drag a bit at times, their charm and charisma are enough to keep you interested until the next thrill.  The rest of the cast is pretty solid but no one really stands out except for Eugenie Bondurant, who plays “The Occultist” and while, as mentioned above, she doesn’t really get a lot of backstory or explanation of why she’s doing what she is doing, is suitably creepy and threatening.

The Conjuring: The Devil Made Me Do It is a solid entry in the universe carried through mostly of how good and charming Patrick Wilson and Vera Farmiga are.  There are some interesting spins on the typical formula, like the more mystery-based plot and the human villain, but it feels a bit lacking with things like creepy and creative creatures and suspenseful scares.  If you’re a fan of the franchise, it’s still worth checking out but I would probably rank it definitely below the first movie and probably below Annabelle Comes Home, which I also just saw recently as well and was surprised at how fun it was.