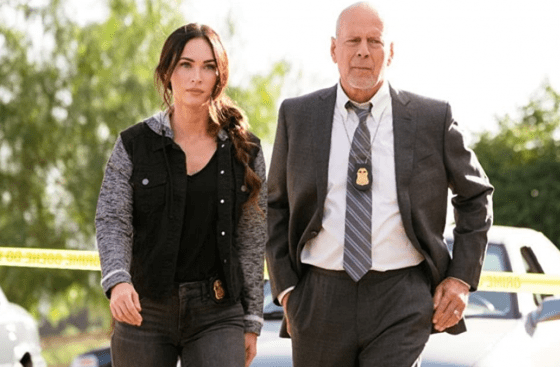 It seems like it’s rarer and rarer these days to see Bruce Willis in a movie that is actually arriving in theaters and not straight to a Redbox but he’ll be on the big screen along with Megan Fox and Emile Hirsch in the true-crime thriller Midnight in the Switchgrass.  Willis and Fox are FBI partners Karl Helter and Rebecca Lombardi, who are tracking a brutal serial killer in Texas.  They team up with a Texas Ranger, Byron Crawford (Hirsch), who has spent years trying to find the “Truck Stop Killer”.  Rebecca decides to use herself as bait to try and lure out the killer but the plan goes wrong when she does end up as the killer’s captive, leaving her partners with limited time to find her before she’s killed.  Lukas Haas, Colson Baker aka Machine Gun Kelly, Lydia Hull, and Sistene Stallone co-star, and the movie is directed by Randall Emmett, who is making his directorial debut after producing movies like 2 Guns, Narc, and Half Past Dead.  This is one of those trailers that seems to show pretty much the entire plot and it seems like a fairly standard serial killer thriller but we’ll find out next month when the movie hits theaters on July 23rd.  Check out the trailer below.

Margot Robbie is Up to No Good in Terminal (Trailer)