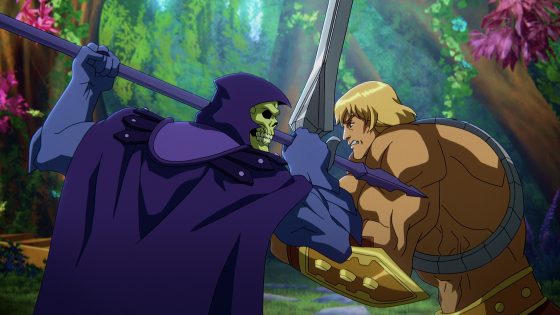 Picking up where the classic 80s cartoon left off, Kevin Smith is bringing Masters of the Universe back on Netflix with Masters of the Universe: Revelation.  Skeletor, now voiced by Mark Hamill, continues his quest to take the Sword of Power and the secrets of Castle Greyskull so he can take over and rule Eternia while He-Man, voiced by Chris Wood, and the Masters of the Universe continue to defend Eternia and stand in his way.  Sarah Michelle Gellar, Lena Headey, Diedrich Bader, Alicia Silverstone, Stephen Root, Liam Cunningham, Susan Eisenberg, Griffin Newman, Kevin Michael Richardson, Kevin Conroy, Jason Mewes, Henry Rolls, Justin Long, Tony Todd, Phil Lamarr, Alan Oppenheimer, Harley Quinn Smith, Tiffany Smith and Cree Summer co-star and the animation has obviously been updated to an awesome modern style that is from Powerhouse Animation Studios, who did Castlevania, but much more American animation influenced than anime-influenced.  The first five episodes of the series will debut on July 23rd on Netflix as Part 1 and you can check out the trailer below.