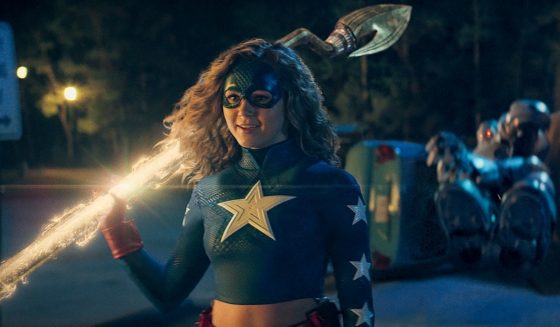 Courtney Whitmore aka Stargirl (Brec Bessinger) is back in August when season 2 of The CW DC show arrives and she’s finding new allies but also new threats.  After defeating most of the Injustice Society of America in the season 1 finale, most of the new Justice Society wants to hang things up and get back to being high schoolers but Courtney isn’t ready to give up the superhero life.  She’s proven right when new threats like Shade (Jonathan Cake), Eclipso (Nick Tarabay), and the ultimate mean girl, Cindy Berman aka Shiv (Meg DeLacy).  Luckily, the Justice Society gains new members with Jakeem Thunder (Alkoya Brunson), who is joined by Thunderbolt, a 5th-dimensional energy being voiced by Jim Gaffigan, and Jade, the daughter of the original Green Lantern Alan Scott, played by Ysa Penarejo.  Even though it takes place on a parallel Earth to the main Arrowverse, John Wesley Shipp is apparently going to make an appearance as well as the original Flash, Jay Garrick.  Hopefully, Stargirl will still maintain the quality of its first season even though it’s now exclusively a CW series, as DC Universe doesn’t exist anymore, and that it’s closer to Superman & Lois and not whatever is happening on The Flash.  The new season arrives on August 10th and you can check out the trailer below.

The Arrowverse Gets Ready for Crisis in the Fall (Trailers)