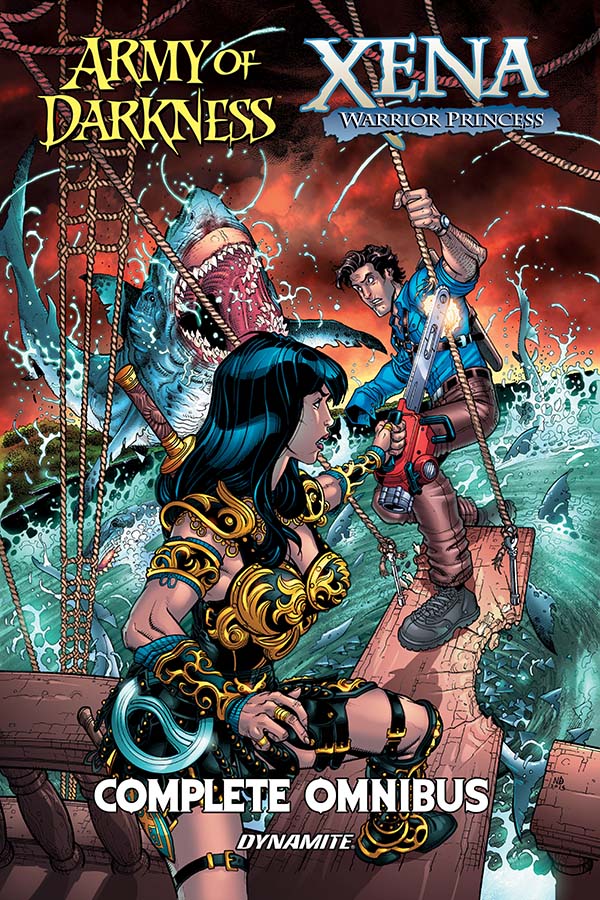 One has a warrior spirit, the other has a joker’s charm, but together they are an unstoppable force against evil. Ash Williams, a prophetic hero and S-Mart employee, finds himself transported barbaric era. He meets Xena, a wandering warrior fighting injustice across the lands. Across time and space, Ash and Xena team up to take on bandits, mythical creatures, and deadites. This epic saga of sword, boomstick, and sorcery, is collected in a 300+ page omnibus collection from Dynamite.

The first volume, Army of Darkness/Xena Warrior Princess: Why Not? is written by John Layman and Brandon Jerwa, with visuals by Miguel Montenegro, Zona I, and Jay David Ramos. This arc begins as a surviving Mini-Ash from the Army of Darkness, as made his way to Xena’s time by the power of the Necronomicon. Possing 21st Century knowledge and evil ambitions, Mini-Ash soon becomes a large menace for Xena and her companions. Their only chance to defeat Mini-Ash comes when the real, full-size Ash appears.

The second volume, Army of Darkness/Xena Warrior Princess: What Again? is written by Brandon Jerwa and Elliott Serrano, with visuals by Miguel Montenegro and Zona I. As Ash returns to his job at S-Mart, a new outbreak of deadites invades. Outnumbered by the growing evil, Xena, Gabrielle, and Autolycus are portal into the action. However, their every move is watched by a cloaked figure that is controlling the chaos unfolding.

The third volume, Army of Darkness / Xena, Warrior Princess: Forever … and a Day is written by Scott Lobdell, with visuals by Elliot Fernandez, Diego Galindo, and Pete Pantazis. When Xena and Gabrielle are overwhelmed by an unstoppable army of deadites, they summon Ash Williams with a page from the Necronomicon. But the summoning Ash does not go right. Instead of sending Ash to the correct time, he lands up in different periods of Xena’s life. Can Ash help Xena before it’s too late, or will he be doom to repeat his mistakes forever?

Army of Darkness/Xena Omnibus is easy to pick up and not put down for a while it’s humor and action will grab your attention. The premise of the comics connects Army of Darkness to Xena: Warrior Princess in a hilarious fashion that fanboys would’ve been crazy about if it ever were to be made in the 90s. The stories are silly but keep building on top of each other, leading to great character development. The artwork is strong, with tons of detail to capture to look of ancient times and modern landscapes.  Ash and Xena are rendered well, having a great look and feel like their original concepts. Ash is witty and clumsy, Xena is stoic and fierce, complementing each other in fun ways as they battle against evil. But most importantly, if you are a Bruce Campbell fan, this is a must-buy.

Army of Darkness/Xena Omnibus will be released on June 16th, 2021