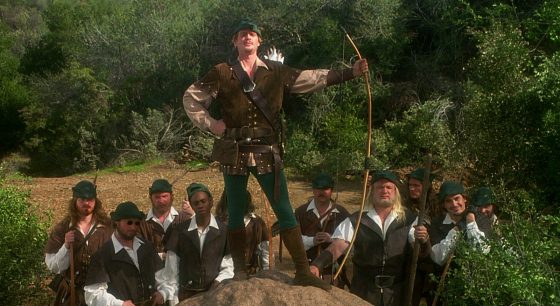 Coming out a few years after Robin Hood: Prince of Thieves in 1993, Mel Brooks took aim at that version, plus other versions of Robin of Locksley, for Robin Hood: Men in Tights.  Following a similar plot structure to Prince of Thieves with some other details thrown in here and there, Cary Elwes plays Robin, who returns home from the Crusades to find the villainous King John and the Sheriff of Rottingham have taken over the country while the noble King Richard is still fighting the Crusades.  Robin finds his family home taken over by John’s soldiers and he recruits a band of tights wearing rebels to battle to save the kingdom and also seeks to win the heart of the beautiful Maid Marian.  Along with Elwes, the movie featured a great comedic cast, including Dave Chappelle, Richard Lewis, Roger Rees, Amy Yasbeck, Tracey Ullman, Dick Van Patten, Dom Deluise, Eric Allen Kramer, Matthew Poretta, and Brooks himself, although he had a much smaller role than some of his previous classics.  The movie got mixed to poor reviews at the time and also didn’t perform as well as prior Brooks movies at the box office either.  The movie apparently did find more of an audience on home video, as Brooks mentioned on the Spaceballs DVD commentary that Spaceballs and this are two of his best-selling movies on home media and it has developed a cult classic in the years since its release.  You can check out the entire movie below thanks to YouTube.

Everything Action Theater: The Mask

Everything Action Theater: The Wraith