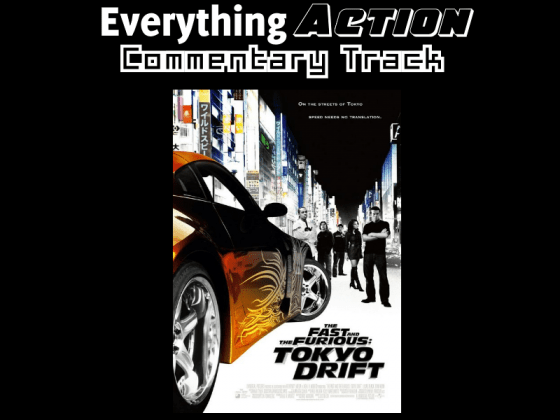 To celebrate both the return of Han in F9 and the 15th anniversary of the movie that introduced him into the Fast Family, Zach, Chris, and special guest Chris Ali watched Fast and Furious: Tokyo Drift for the latest Everything Action Commentary.

The third movie released but the fifth chronology, Tokyo Drift shifted things away from the US for the first time as troubled “teen” Sean Boswell (Lucas Black) is sent to Tokyo to live with his father, who is stationed there for the Navy after the latest in a string of driving-related incidents lands him in trouble with the cops.  Sean quickly gets back into the world of racing while adjusting to his new life in Japan but Tokyo is ruled by drift racing and DK (Brian Tee), which Sean knows nothing about.  After embarrassing himself in a race against DK, he’s taken under the wing of Han (Sung Kang), partially because Sean owes Han for wrecking his drift racer, and learns the ways of drifting and criminal extortion.  The guys try to figure out what Han’s criminal plan is, try to spot Deckard Shaw, marvel at the early 2000s technology, how they got Sonny Chiba to appear, and more.

Tokyo Drift is unfortunately not really streaming anywhere but you can sync it up to a DVD/Blu-Ray copy or a digital version and watch it along with the Everything Action “family”.