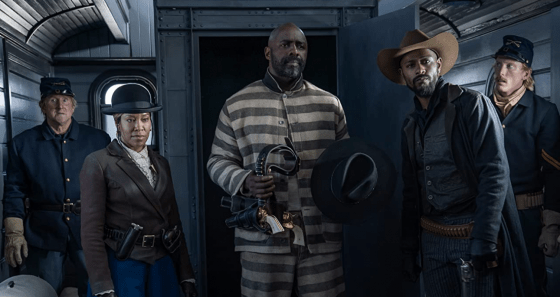 Channeling some major Django Unchained vibes, Netflix is pitting two crews of awesome actors against each other in the Wild West with The Harder They Fall.  Lovecraft Country’s Jonathan Majors plays Nat Love, who learns that his archnemesis Rufus Buck (Idris Elba) has escaped custody.  Love assembles his crew, including Zazie Beetz, Edi Gathegi, Delroy Lindo, and RJ Cyler to track him down and finish him while Buck reassembles his crew, which includes Regina King and LaKeith Stanfield.  Deon Cole, Damon Wayans Jr, and Danielle Deadwyler co-star, and the movie is directed by Jeymes Samuel, who previously directed 2013’s They Die By Dawn, a similar western with a similarly stacked cast.  The Hard They Fall will be out later this year on Netflix and in some select theaters and you can check out the trailer below.