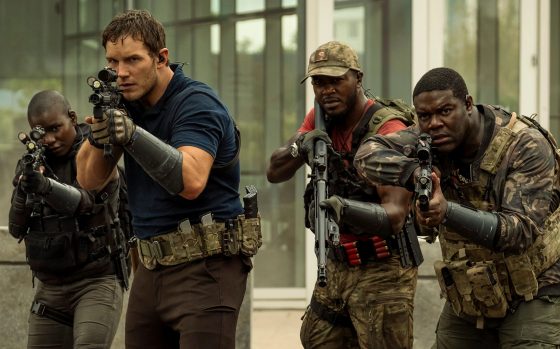 Amazon got into the summer blockbuster arena this past weekend with The Tomorrow War debuting on Prime Video and it offers some solid action and fun even if the logic of the time travel doesn’t make a whole lot of sense.

Set in December 2022, Chris Pratt plays Dan Forester, a high school science teacher who also happens to be a former special-ops badass.  During the World Cup, a group of time travelers arrives from the year 2051 and claim that humanity is on the brink of extinction fighting a war against aliens known as “Whitespikes.  The world’s governments are somehow instantly on board with this and send military personnel to the future, but most of them don’t make it back.  This prompts a worldwide draft where regular civilians are drafted and sent to the future for weeklong deployments, although like the soldiers before them, most don’t make it back.  Dan is eventually drafted and sent to the future, where he learns about a plan that could potentially end the war.  You really need to kind of just go along with what The Tomorrow War is putting out there because if you think about any aspect of the plan or the mechanics, it starts to fall apart.  The movie does some hand-wavey explanations about why they can only go back and forth between these two points in time but the fact that they are sending untrained civilians in wave after wave to the future is a very dumb, Zapp Brannigan style strategy and when you learn about the actual plan of the future commander, played by Yvonne Strahovski, it makes all the people that get sent to get slaughtered before seem even more pointless.  There is a pretty clever twist you find out later on in the movie about where the Whitespikes actually came from and the third act takes place in a pretty unexpected environment, so it does have some cleverness among the more ridiculous aspects.  The Whitespikes themselves are actually some pretty awesome creature designs and the first time you see one fully, it’s pretty horrifying and they are a relentless and intimidating threat and the CG on them is pretty great throughout.  The movie was originally supposed to be a big Paramount theatrical release before Amazon bought it and it had a budget of $200 million, and all the money is up on the screen as far as the special effects, like the very Waterworldesque home base for the remaining future human forces.  The action is also solid throughout although there really isn’t anything that stands out as particularly unique or cool and it’s not up the level of something like the kind of similar Edge of Tomorrow.

Chris Pratt is doing his usual thing as Dan and if you enjoyed him as Peter Quill, you’ll enjoy him here as well (although he does some impetuous Star-Lordesque emotional decisions that almost jeopardize things just like in Infinity War too).  His character is kind of ridiculous in a Mark Wahlberg in Transformers way where he’s a military badass but also a giant science dork but he’s definitely more likable than anything Wahlberg was doing.  JK Simmons also gets to do what we expect from him as Pratt’s prickly dad, James Forester, although it seems early on that he is only going to have a cameo as he’s in one scene but, fortunately, he comes back later on for the third act.  Sam Richardson is a stand-out as Dan’s fellow draftee Charlie, who is also a science dork but doesn’t have Dan’s military skills and provides a lot of the comic relief with his bumbling attempts to quickly figure out how to fight.  Yvonne Strahovski is solid as well although she gets saddled with the more serious side of things as the sort of John Connoresque leader of the human resistance and the second act where she and Chris Pratt are together is bogged down a bit with more drama than other parts of the movie.

The Tomorrow War is a solid sci-fi action movie that will give you summer blockbuster thrills at home, but you probably won’t remember much of it shortly after watching it.  There’s solid action and Chris Pratt is likable and snarky throughout but you definitely have to not really think about the logistics of the plot and just enjoy the alien blasting set pieces and special effects.  If you have Prime Video, it’s worth checking out for some mindless fun.